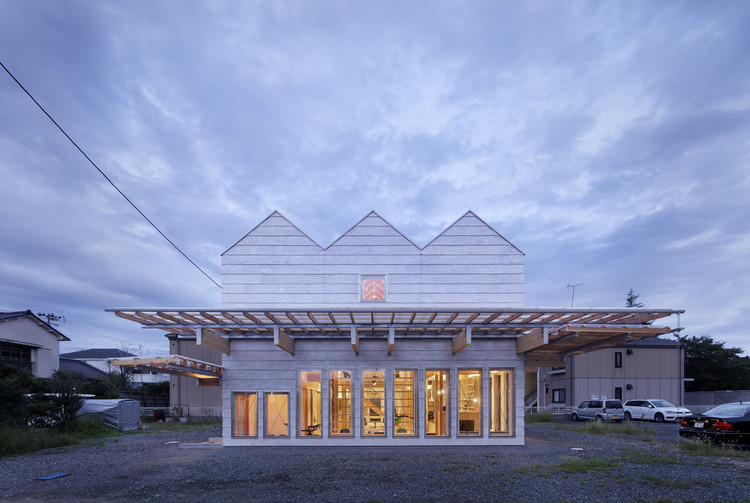 Text description provided by the architects. I started thinking and practicing about the middle area (‘engawa’, sunroom etc.) with the airlock entrance as a trigger. I was born and grew in cold climates and continued design while living there, so I began thinking about the middle area. At the beginning of my design I had a consciousness of "a middle area to protect". It is a space "between" the human consciousness from the inner space to the outer space. This resembles the process of Alva Aalto architecture, which was built against the Northern European severity of nature.

People put themselves in the inner space, feeling the outer space from there, and touching it. The airlock entrance was made in cold district as a "middle area to protect" architecture that prevents cold air from flowing outside into the room during the winter season.

Conventional airlock entrance is very narrow and cheap, it is installed to stick to the building. It plays an important role to improve the indoor environment, but its appearance and space are very sad. I thought that I wanted to treat it as a more enjoyable existence. In my private house, we ordinarily made the airlock entrance slightly installed at the entrance as big as the children's room.

Then, vicinity was born there, a good sense of distance was created between the outside and the inside. In the space designed as " a middle area to protect ", indoor activities will overflow in the summer. It was the “between” space consciousness towards the outside from the inside, it was not “between” from the outside to the inside.

Now, I am considering the possibility of "a middle area not only to protect". It is to aim not only the severity of winter but also the middle area where you can enjoy all the conditions by thinking about the way of "between" from both inside and outside. In this plan, we placed a building in the center of the site. This is one option when setting a small footprint architecture in a limited residential section of a rural district, with limited conditions including cost. Although some hierarchy occurs depending on the direction and the neighboring state, "vacant lands" are born equally to the four sides of the building. When designing from the inside towards the vacant land (outside), the feeling of the person in the vacant land seemed important. I attempted to create a "between" from both directions that would not only be a large eaves as a base from the inside but also as a stronghold of humans from the outside. There are "four areas" in "four rectangles". The first rectangle in the center of the building is the space in the most stable state. The second one is a semi-underground rectangle surrounding it, which is a thought and continuity space from the airlock entrance.

The rectangle of the third large eaves beneath space and the rectangle of the fourth vacant land were designed as a multipurpose area, so I decided not to limit the function inside this area. Architecture is an existence born to obtain certain kind of stable state from the fickle state of the outside (earth). The airlock entrance is a response to a certain limited situation. I have made various designs while changing it and enlarging it. It is important that "between" from two-way is more free and does not limit the function. The elegant space under which the arms spread widely becomes a place of various activities of human beings and is full of possibilities to become a large middle area. The middle area dose not only responses to the environment but also response to human pleasures.