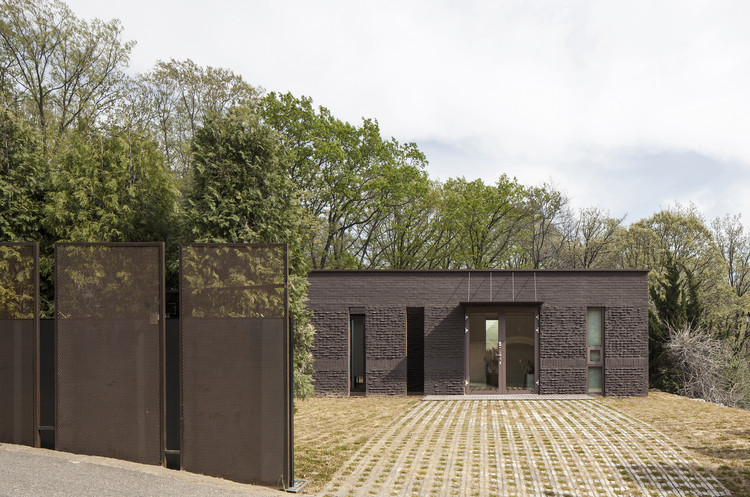 ‘Wuju Jae, je’ which means a house with plentifulness, was built for a couple in their 50s and three children. Both of the couple spent their childhood in the countryside, went up to Seoul with their marriage, and have lived in several apartments constantly for more than 30 years. It is said that living in a midtown apartment is comfortable, but they have felt stuffy and decided to spend latter half of their life with nature as their retirement age is drawing near. They looked around for a site at Gwangju, near from downtown, in order that the couple and their children could commute, and eventually they found out the sunny, snug and warm site with clean air in well-arranged village near the forest, for this house. Then they visited the designer. Satisfied with the designer’s previous projects such as San Soo Eun and W+House, they shared their ideas with the designer.

“What make me exciting whenever I design a space of house are a fact that the house is a space not for many and unspecified persons but for specified persons, and the process itself to explore the persons. I also designed this house through the process to understand trivial stories, lifestyles and attitudes to life of the family. I heard about a reason to build this house, things they wanted to express in it, and a name to keep its meaning. ‘Wuju Jae, je’ which has plentifulness, is a very impressive expression.”

The designer started to map a plan about the space from its name, and discovered a clue from their lifestyles and attitudes to life known through numerous questions and answers. It is just ‘a house to be plentiful by emptying, a one-storied house with naive and tidy elevation in harmony with nature, keeping modern Korean beauty’.

Above all, the designer arranged this house toward the east in the light of close-range view and distant view according to the way of thinking nature, and laid out a courtyard where the light would always stay. Without giving up what might be lost due to southern exposure - they want to use the hill behind this house as a backyard or a vegetable garden, and to fill up the window with the beauty of roof soffit of neighboring Hanok(Korean traditional house) Village, he arranged the building toward the east for views and various uses, and the courtyard became a solution of the problem caused by it. In this way, it was built as a house fitting completely to their lifestyle through communication between the designer and the owner. Its plane was planned based on Ja(Korean traditional unit of length, about 30.3㎝), and Ja was applied to the sizes of details including rooms and doors for the convenient use and the reasonable plan and construction.

The designer attached special importance on a margin in designing this house, and hoped that this house would be a beautiful space enough only with the surrounding scenery changing continuously day and night seasonally and the change of light and shadow. This margin makes the scenery a hero of the space, because interior space is finished with translucent white Hanji, Korean traditional paper made from mulberry tree. Korean interior composition of space also contributes to highlight this margin. On the contrary, the designer gave naturalness to exterior space by emphasizing rough texture of mortar poked out unevenly between dark bricks piled up with pressure.

The owner said that he recognized the delicate design of each space and details while living in it actually. “I can feel and see the nature through each window, and I, in particular, like the organical separation and communication by a sliding door. I can see the courtyard with nandina tree from Maru playing as a living room and from the table, which makes me joyful by showing various figures of the courtyard in all seasons. On a sunny day, leaves glitter brightly as if turning on the light at the courtyard, and under the full moon, the courtyard is full of secret moonlight. Where my family stays for the longest time are Maru and a room with the table. The room with the table is used as a space where we stay comfortably while taking teas together, reading books, and lying down to rest as well as having meals, because beautiful scenery of the forest comes in it through the windows on the both sides, and a sitting style and a standing style coexist in this room harmoniously.”

It is said that the designer often heard from the family even after completion last winter. They sent photos of snowman standing on the snowy courtyard in winter and those of flowers bursting into bloom they grew with their own hands at the backyard in spring. And one day, they told him the full moon floating like a cloud in the courtyard and the atmosphere of their house filled with the light of the full moon, by telephone. This ‘Wuju Jae, je’ is a plentiful container to keep people and emotion as its name means.