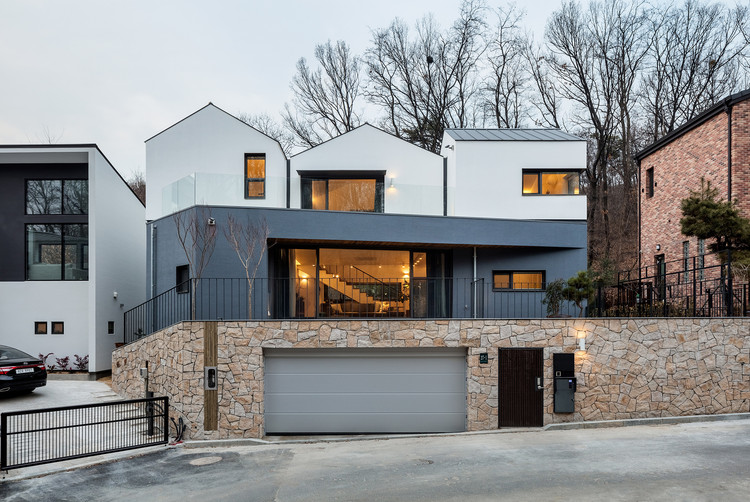 ‘Three-Roof House’ is a home for a couple and their two daughters who lived in an apartment for a long time. The couple who loves wild flowers and trees decided to leave their apartment, dreaming of having a home with a garden.

Nestled in a housing site in Yongin, the site is sitting at the end of a cul-de-sac receiving only few visits other than its residents, thus it’s secluded and calm. The site is a south-facing slope land with a rectangular shape running along a road, and there is a 2.8m level difference between the site and the road. Though it’s in a downtown area, its front and rear are both adjoining parks, so it offers a decent view.

The house takes advantage of such site condition to protect privacy and have an outdoor space through which inside and outside are effectively connected. The 1st basement floor adjoining the road is turned into a parking lot to overcome the level difference with the park in the north. The upper part of the parking is made into a garden, and this garden can be conveniently accessed from the 1st floor. As the north area is directly connected with the park, a deck is added to enjoy various park sceneries changing throughout all seasons.

This ‘Three-Roof House’ is characterized by simple house-shaped volumes which are naturally spread upon the volume of the 1st floor stretching out from side to side. It’s designed by separating the 2nd floor from the 1st floor, composing it with independent volumes according to required programs, and reorganizing them in response to the requirements of client and surrounding conditions. This design approach prevents the house from overwhelming its surrounding landscape and enables it to accommodate the needs of client more flexibly.

‘Three-Roof House’ appears as an assembly of independently designed rooms for each family member. This project is an attempt to secure the independence of individual spaces, for Korean society in which apartment housing is predominant.