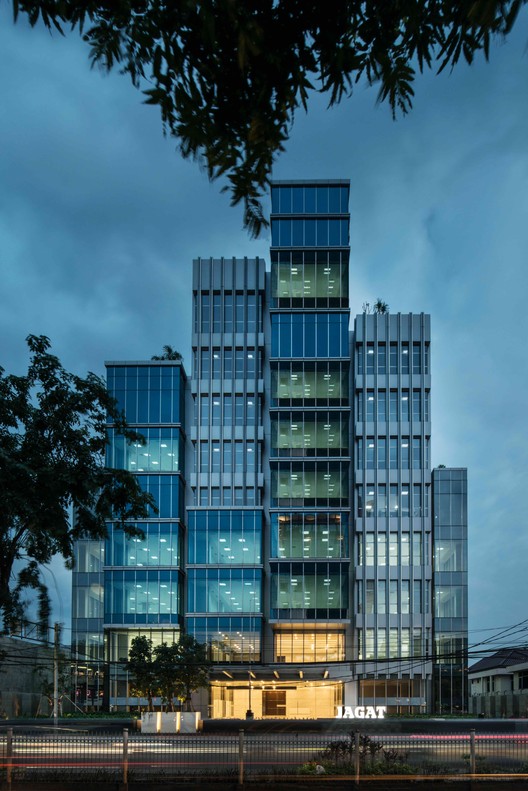 Text description provided by the architects. Situated in Jalan Tomang Raya Jakarta, Jagat Tower is the new office of Jagat Construction, a company engaged in construction field. The client asks the architect to design an office tower not only as their main office but also as a rental office. Its total area is 1740,5m2, and consist of 9 floors. On the lower ground there are lobby and banking hall, 2nd-8th floors are for tenant office and 9th floor for the most private function, meeting room / ballroom room.

The main aim of design was to create an effective and efficient space program of office. To achieve the desired level of effectiveness and efficiency, the architect tried to arrange the building mass in such a way. With the length of site 42m, the form of a large-volume building should be avoided because it will ruin the urban fabric of the city.The mass composition of the building must be able to break the massive and bulky mass.

After several attempts, the architect decide that the most suitable mass arrangement for this building is stacked one. With a “stacked box” mass configuration, building efficiency can reach up to 80%, quiet effective for a comercial building. Such mass configurations also allow the architect to add open space serves as a communal space on the roof of 6th, 8th, and 9th floor. This communal space also serves as a socialization space for workers. Actually it’s not an easy job to convince the client about the importance of these communal space. But in the end the architect is able to convince the client how important this communal space is to the workers. Because the space for socializing will increase the effectiveness in work

As for the facade concept itself, the facade exploration illustrates an equalizer to analogize the company's progress flow with 3 blue boxes. The inspiration also comes from the “san” character in chinese number means three. It’s the analogy of the number of generation of Jagat Construction.

The building facade is designed with double glass system. With this facade system, the gap between the glass will trap the heat and noise from the outside so it can reduce the heat and noise from the outside of the office. The glass selection also important. The selected glass is a kind of glass with low OTTV value. Another facade feature added by the architect is the vertical aluminium bars. This aluminium bar fuctioan as a sun shading for this office building. 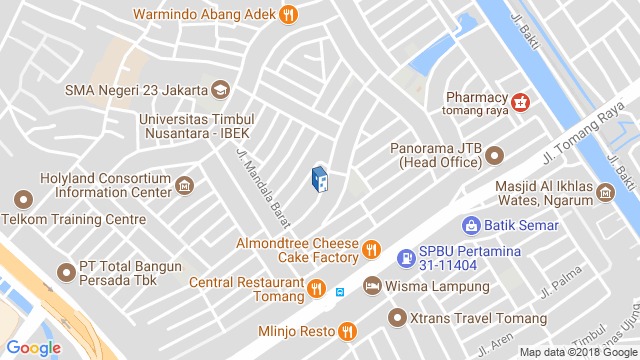 Location to be used only as a reference. It could indicate city/country but not exact address.
Share
Or
Copy
About this office
Sindhu Hadiprana Design Consultant & Studio Sa_e
Office
•••