Text description provided by the architects. This is a facade remodel project commissioned by a new owner of an old hotel building.  The old hotel was the largest hotel in Luo-dong when it was built in the 70's.  Luo-dong is a town with a population of 70 thousand, located on the north east coast of Taiwan.  It was historically a center for lumber business of the region and has been transformed to a tourism hub when the timber industry declined in the 80's.  The original hotel was a successful hotel for businessman at time but has been unable to attract tourists when the tourism develops quickly in the town.  The hotel had been dismal since then for decades.  The mission of this project is giving the hotel a new identity so that the architecture can continue its life through the new era of the town history.

A strategy combining renovation and preservation was quickly established: Remodel only the facade facing the main road, preserve the rest of the original building skin as detailed as possible.  The building may not have much public recognition but was a true local landmark bearing the history of a generation in the region.  Preserving and reinstating the connection to the local history is as important as (if not more important than) giving the building a new outfit.

Most of Luo-dong's tourists are from the nearby Taipei metropolis.  Foreign tourists from cities in Japan, Hong Kong, Malaysia, Singapore, and other southeast Asia also stop by this town occasionally.  Located at the center of this small town, the new hotel sets a business strategy targeting urban high-end customers.  It is crucial having a design that forges global and local atmosphere together.

Standard, off-the-shelf brick emerges as the key element.  This ancient building material has proved itself being highly adaptive and capable of handling contemporary technology.  Algorithmic computer tools and digital fabrications are utilized to create a textile-fabric-like facade and improve construction precision and speed.  Instead of robotic construction, local masonry workers are commissioned to this challenge and they instantly realize that it will be the first of its kind and scale in the nation when completed.  A mock-up was constructed to test the feasibility of the construction method and budget, giving confidence to both the masonry workers and the owner.

Bricks from local brick kilns are originally preferred and researched but they end up not fit to the design and construction requirements. All bricks are manufactured in Korea and shipped oversea to Taiwan, then handled and constructed by local workers in town. 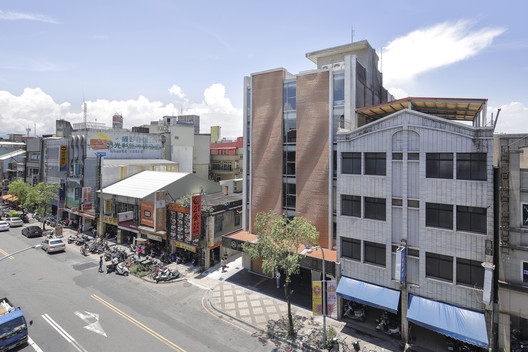