Text description provided by the architects. Classical palatial buildings and old industrial spaces, such as the medieval dockyards, both share (at least) three conditions. First of all, the space is continuous and flows from room to room. Secondly, the structural vanes are equivalent, regular and adaptable. And finally, the volume of the series of spaces is not only related to the room size, but also to the holistic interpretation of the building. Of course, other obvious features differentiate these two typologies.

This house ambiguously inherits these three conditions. Its structure is clearly organised in four long continuous vanes. The impair number of structural lines modernly flirts with the classical paradigm of the symmetrical and classic venetian palatial structures of three vanes and four column lines. Somehow, it occupies a space in between the classical structural rhythms and the serial workshop structures.

Inside, the initially isotropic and aligned structure is organised by three courtyards. The resulting subspaces are occupied by the different common areas of the house: kitchen, dining and living rooms. Each courtyard is an external extension of the annexed living areas. The remaining fourth vane is reserved to the bedrooms wing.

The materiality of the house is subordinated to the roof structure. A white painted concrete cantilevered surface gives character to the building. It is ramified in beams and vaults, and floats four meters above the ground floor plant. Beneath this element, a mat-building system connects to the ground, with local ceramic tiling and rendered walls. Timeless traditional materials are combined with modern glazed surfaces around the courtyards.

We could say this house is a sort of palatial workshop, something queer as a clockwork orange, indeed. However, it works. 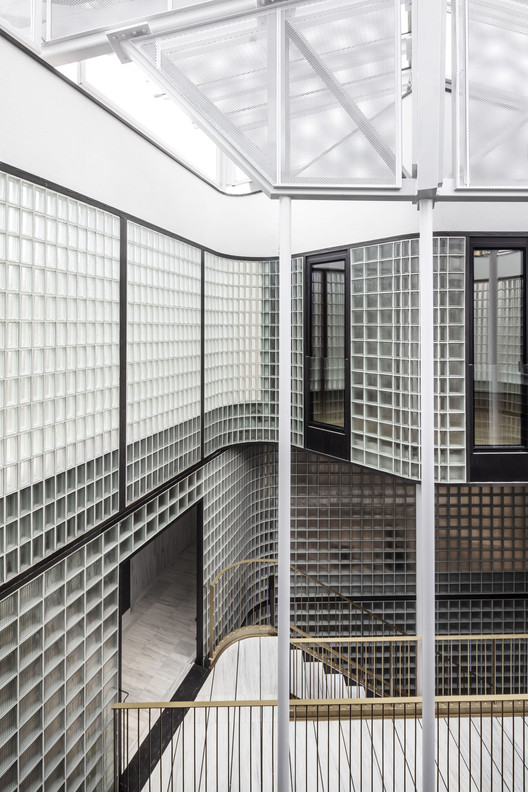