Save
The 2018 Winter Olympics Stadium That Cost $100 Million to Build, Will Only Be Used 4 Times, and Is Roofless
Share
Or
Copy

Traditionally, Winter Olympics stadiums have stuck to a design that obscures the sky and protects against the elements in order to keep the guests warm. This year, the Pyeongchang 2018 Winter Olympics organizing team wanted to try something different. Guests will watch the three-hour opening ceremony at the PyeongChang Olympic Main Stadium – and it will be roofless.

Pyeongchang, located not too far from the border of North Korea, is notorious for one of the worst winters in the country. Temperatures in PyeongChang are forecast to reach minus 14 deg C (about 7 deg F), partly due to the powerful, biting winds that barrel down from Siberia and the Manchurian plain. This may be the coldest Olympics since the 1994 Olympics in Lillehammer, Norway. And because of the curious roofless architecture, the roughly 35,000 spectators will be completely exposed.

This PyeongChang roofless stadium cost the South Korean government $109 million (116 billion Korean Won) to build. During the design phase in 2015, lawmakers raised multiple concerns over the lack of a roof to protect spectators from the elements. However, the issues were dismissed due to the Culture Ministry’s budget concerns. The stadium also does not have central heating because it is too expensive.

Now the extreme weather has left organizers scrambling for ways to keep spectators warm. This fear is not unwarranted, either. During the opening event for this stadium last November, seven people were stricken with hypothermia. For now, a windbreaker, a lap blanket, knit caps, a heated cushion, and hand and feet warmers, will be given to all spectators this week in order to help them endure the three-hour opening extravaganza under these harsh conditions.

Around 160 VIPS, including President Moon Jae In, Japanese premier Shinzo Abe, US Vice President Mike Pence, will be seated on higher levels and bear the full brunt of the winds. They are expected to get plusher, bigger blankets than regular spectators, and the organizers are considering offering earmuffs too. There's also mention of pushing "audience participation" to keep people moving.

For better or worse, this Olympic stadium will only be used four times - for the Opening Ceremony of the Winter Olympics and the Paralympics – before it is torn down. City officials decided it would be too expensive to upkeep the stadium. Perhaps this $100 million dollar stadium, roofless and temporary, is evidence of how City governments are under pressure to build an impressive space for the Olympics in a short amount of time. In doing so, they fail to consider the appropriate architecture for the stadium's use, and also how to maintain the stadiums for the future. The 2016 Rio Olympic sites fell to disarray as well just 6 months after the games ended.

News via The Straits Times and Korea Times 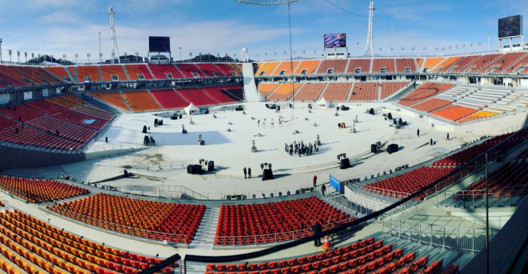