Save
House with a View / Attila KIM 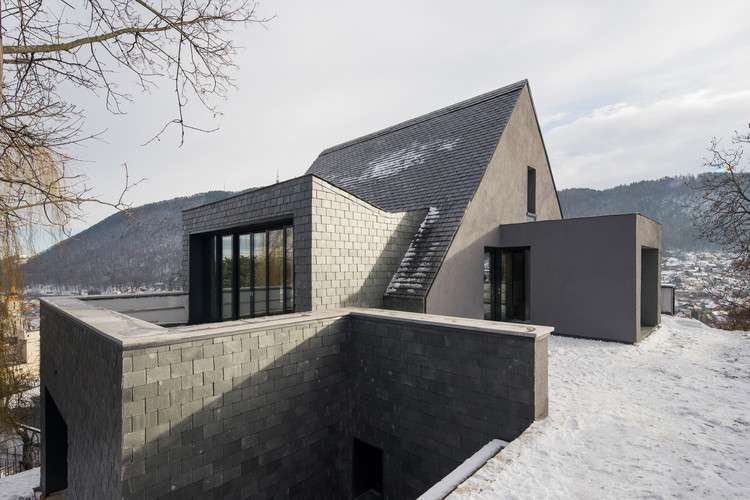 Text description provided by the architects. The house situated on a picturesque hill of Brasov, Romania, surrounded by mountains and with a unique panorama of the medieval city center, aims to bring a contemporary tribute to a lost early 20th century house, that once existed on this site. The house being visible from the city center, the goal was to define a discrete silhouette, that overlaps the natural background, and to use schematic finishings, such as slate, transforming the house in a model representing the quintessence of the memory of the old house.

The reconstruction after a faulty renovation, causing the loss of the original house, was already started and the ground level partially finished, when the first meeting with the client took place. The main goals were to redesign the building, keeping the newly built parts, and to bring a contemporary tribute to the lost house.

The functional reconfiguration brought the living areas on the first floor, offering this level a 360 degrees panorama. The more private spaces were placed on the ground floor, with a strong connection to the garden, defining outdoor areas, protected by vegetation. Downstairs the walls of the previous project were kept and the space was reorganized. The main feature of the project is the undivided space of the first floor, completely free of structural elements, a concrete shell, comprising the walls and the roof, placed over the existing construction. The memory of the old house is present also in the interior: the owners were nostalgic of the original wooden beams, that are referenced over the kitchen, and serve as the floor of the open study above.

The previously existing level structurally uses concrete frames, arches and brick walls. The new part, above, is entirely made out of reinforced concrete, unloading along the exterior contour of the existing structure. The two main facades use plaster as finishing, as a memory to the old house, however the color is dark grey, in order to offer a more discrete look, that blends in with the surroundings, letting the house to be discovered from the far, instead of dominating the landscape. The slate roof and walls connect, offering a secure management of the rain and ease the overall maintenance of the building.
The project was nominated for the 2017 edition of the Mies van der Rohe Award.