Save
HOUSE 3/6 in Dongducheon / Y GROUP 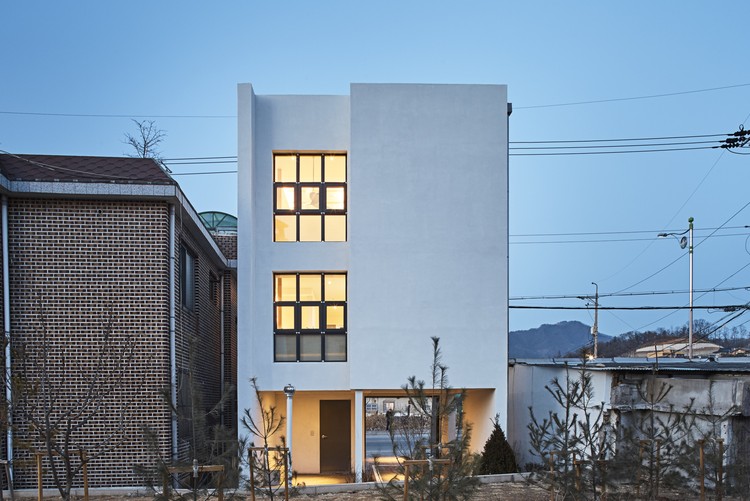 Text description provided by the architects. The third house. A house opened to sky at Dongducheon.
It’s a house of three members of family, father drives a truck and delivers mattresses, mother is convalescing at home after the cancel surgery, and a daughter who always care about family, a middle school student. Building a 40-square-meter of single house was possible for this family. However, we decided to build a three - story building with a parking lot for a truck and a rest place for mother. For she likes reading books with daughter. Also, we made a small but solid kitchen space for the mother who cooked on the outer floor because it was not ventilated. I needed a design to satisfy space such as a parking lot, a family room, 2 rooms, a toilet, a kitchen, a study, and small yard.

The narrow house
It’s not exact criterion, but usually, 15-squre-meter is called the narrow house. Since Dongducheon ground is a little bigger, but not as a complete narrow house, the house well must save a small space concept. Some principles for applying the concept of narrow houses is as follows:

Vertical openness
In small space, the spatial stacking method using the height is advantageous. In other words, Although, it is a narrow house of 2-3 stories house, it has a vertical openness in one or two spaces. I applied the concept of open spaces on the 2-3 floors of the courtyard and the concept of open spaces on the 2nd and 3rd floors of the library. I have eliminated the perception of a narrow house and the spatial stiffness. The house was not monotonous, and made it possible to have various spatial experiences.

Segmentation Articulation
I completed the form of architecture through the segmentation concept, and I got the idea from Jenga. Starting from the box, I segmented the parking lot, divided the stair hall, divided the courtyard, separated the window to the south, and separated the 2nd and 3rd floors into space. In the end, the narrow house of the city must give sense of openness somewhere, and the result is quite different depending on how it is segmented.

The Right of Sky View
In the previous house, it was hard to see the sky at the house. Everything was blocked, and even the entrance to the front porch and the outdoor space were covered up. I hope show sky to the family. So from now, they can view up the sky at the kitchen, living room, the study, and each room of this house. The view of the sky means the future of the family, it can be think 'taking a break once' as the concept. It is the perfect home for this family who thinking about tomorrow and needs to take care of oneself.

Windowless Elevation
As a new image of the village, the feature is windowless on the road side. The roadside’s view is untidy and noisy. The exterior of the old houses and the continuity of the buildings indiscriminately built, I thought it would not be a visual pollution in the city if it was built in the simplest form.

Piloti
The parking space on the first floor was composed of piloti. The houses listed on the road were in the same layout as the walls cut off from the road. The presence of this piloti space perceived as a visual comma space in the urban context. Because there was no parking lot, the father parked in the distance, walked, and theft was frequent, so the parking lot became the best space gift for the father who is delivering.

Opening
Since the Industrial Revolution, the development of architectural technology has freed innovation and window size. The windows were narrow and small in the brick-type buildings, but now various window sizes can be applied. In the north side roadside, windowless wall was planned to prevent noise and dust, and window of the courtyard and study was planned the open windows. On the other hand, the veranda windows of the courtyards were sufficient to provide mining and ventilation, and relieved the internal stiffness. Eventually, the facade was completed with the diversity of the window. I wanted to make a house that can feel the sunshine through the window.

Hybrid Structure
As it was a three-story house, I was worried about how to design the structure. The first layer is reinforced concrete and the second and third layers are wood structures. It is a rare structure in Korea, and it will be proposed as a good alternative in the future. I did not make the whole RC structure. The reason that the 2nd and 3rd floors made wood structure, not only to secure space but also to use the eco-friendly wooden material for the mother’s health.