Finished in 1974, the waterfront development held 426 affordable units and was part of Paul Rudolph’s unrealized master plan for a revitalized Buffalo waterfront. Featuring sharp angles made of concrete and mono-pitched roofs made of heavy, serrated metal, the complex’s design was unmistakably Rudolph’s.

Norstar, a private company, purchased the site with the intention of demolishing the state-built homes and overhauling the complex. The first phase of demolition and redevelopment began in 2015, and has already replaced five of Rudolph’s cascading buildings with seven townhouses and a short apartment block, for a total of 48 new affordable housing units.

While the final phase of the project was slated to begin this spring, Schmidt’s unwillingness to leave has held up the rest of the process. His defiance is understandable, as Norstar had previously promised Shoreline residents that they would have time to relocate, before advancing the demolition timetable without warning.

While Schmidt is now the last resident in what remains of his 300-unit complex, his reason for staying isn’t driven entirely by preservation. Schmidt is demanding an apology from Norstar for displacing the 222 families who have been forced to relocate, as they were told that the buildings had fallen into an unlivable condition. The local community has disagreed, and argues that the apartments are still structurally sound.

Norstar has dismissed these claims, and reiterated that no one has been forced to move under false pretenses.

“We are pleased that we can bring people very nice, new affordable housing in the downtown business corridor. We do have to relocate these people to rebuild housing, people will be able to come back, but they do have to qualify under that state’s section 42 low-income housing regulations. But at this point, all of our residents are income qualified,” Norstar representatives said in a statement.

Many of Rudolph’s buildings have met ignoble ends in recent years, despite outcry from preservationists and architects. Earlier last year, one-third of Rudolph’s Orange County Government Center was partially demolished and replaced with a more modern-styled annex. Judging from the more modern buildings that have emerged from the first phase of the Shoreline’s replacement, the same process is repeating itself in Buffalo. 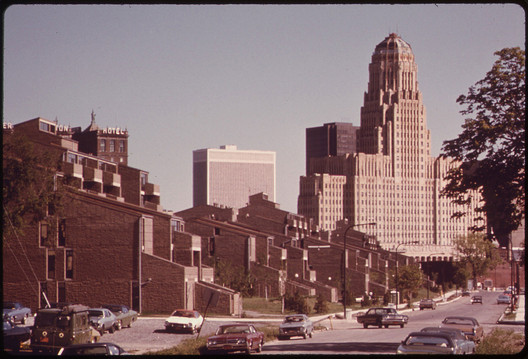