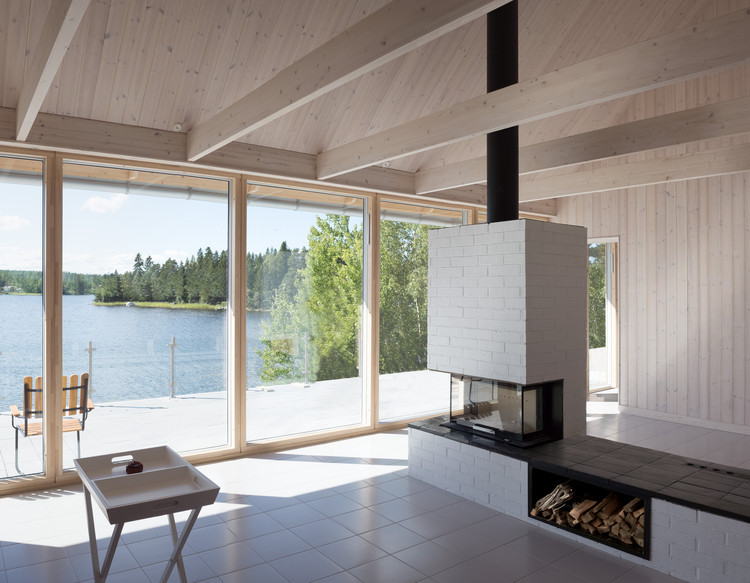 Text description provided by the architects. HUS NILSSON is a summer house situated at the Norrfjärden bay in the archipelago ofnorth Sweden, on a steep slope between the forest and the sea. Despite being on the east coast, the site is facing west. Buildings in the area are mainly summer houses, scatteredalong the coast line and accessed from behind by a net of private roads. The bay is livelywith people fishing and bathing in the summer, and ice skating in the winter.The existing house on the site was a very small cabin from the 1950s, without water in thewinter and mainly built for short visits - somewhere to get warm after fishing and skating.The family wanted a house inhabitable during all seasons, with internal and external spacesturning towards the beautiful view across the bay and towards the forest.

They also wanteda house which could both be sociable and allow for privacy for the different members of thefamily, also in the long term.The new house, a singular long and narrow building volume with a steep pitched roof andclosed gables, spans across the site and aims to be the connection between the forest andthe water. By its form and its placement on the site, it allows many of its rooms a view ofthe sea; the placement also affords privacy and prevents the house from feeling overlookedby its neighbours. The building is tied to its site by being sat directly upon an existing stoneretaining wall; the wall creates a natural outdoor terrace overlooking the sea, onto whichthe internal spaces connects. On the forest side, the site is excavated in order to create amore generous space for play and outdoor work.

The visual and physical contact between the house and with its surroundings is achieved bythe general layout of the spaces: a central open and sociable living space with bedrooms oneither ends which can be connected or closed off. This configuration incoorporatescirculation space in order to minimize wasted floor area, and creates different ways ofmoving through the house, which together with enhanced sightlines increases theperception of space and gives a feeling of that the house is bigger than it is. This feeling isfurther emphasized by the central and freestanding fireplace which also provides a focalpoint and divides the large space into dining and living areas.The one commonly featured&#39;outdoor room&#39; in Nordic private houses is here integrated in the main volume; by making itan external passage through the house, it not only creates a visual and physical connectionbetween the forest and the sea, it also lifts it from its normal periferal position to be thenave of the building.Hus Nilsson is by its form and materiality connecting to the local building tradition in thearea.

Although being situated by a fairly sheltered bay in the Baltic sea, the impact of theclimate on buildings in this part of the country is significant. The roof has a steep pitch inorder to reduce snow load, and is given a large overhang to better protect against wind andsalty water. The facade is clad with heart of pine treated with a silicon protection andcomplemented with a cement based stone cladding on the forest facing elevations.The roofis of aluminium-zinc coated sheet steel. The structure is entirely made out of timber; loadcarrying timber studs with a gluelam roof structure. The foundation is a concrete slabfoundation.The building was completed in the summer of 2017. The construction took 7 months fromthe demolition of the existing cabin until completion, and was made possible by an efficientand very successful collaboration between the architect, client, and contractor. 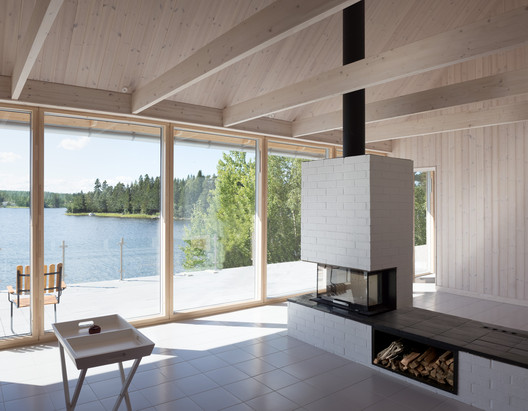