Text description provided by the architects. Icon YunDuan is a hybrid building located in the high-tech special zone on the outskirts of the city of Chengdu. The aim of the project was to create a landmark visible on entering the city as well as a local landmark for the earlier building phases of the area.

The project is based on a winning competition entry from 2009. The competition organiser, the state-owned Chengdu Hi-tech Investment Group, exceptionally selected three Nordic practices for the competition. In addition to PES-Architects, the invited offices included Schmidt/ Hammer/ Lassen Architects from Denmark and Helin & Co Architects from Finland.

Immediately after the competition results were announced, PES-Architects began to develop the area on the basis of the winning entry in collaboration with the client and a local design office, China Southwest Architectural Design & Research Institute (CSWADI).

Due to the size and tight schedule of the project, we proposed that the design task be divided, with PES-Architects in charge of overall planning and designing the tower, and Helin & Co responsible for designing the residential building.

The functions planned for the tower also changed quickly. What was originally an office tower evolved into a versatile building complex. In addition to parking, the underground spaces were to accommodate a spa and gym of 5,000 m2 as well as staff facilities. The first two levels of the building house a shopping centre. The third and fourth floors feature restaurants. A conference centre occupies the fifth floor. This is followed by 23 floors of offices and 13 floors reserved for the apartment hotel. The top three floors of the tower contain restaurants and reception and meeting areas.  Later, the client decided to replace the spa with an underground concert hall seating 900 people. This was designed by our Chinese partner partly under and partly adjacent to the building. The concert hall plan postponed the start of construction by about two years. Eventually, an 18-metre deep pit was excavated, covering an area of approximately 4.6 ha, and construction could begin.

The core of the building is braced with concrete and comprises the shafts and vertical connections. The walls of the 22 x 22 m core are 1,000 mm thick. The rest of the building frame is of steel. The main components of the frame consist of round, concrete-filled steel columns and a 9 m x 9 m grid formed of 600 mm x 110 mm steel beams. A 120 mm thick concrete slab is cast over the secondary beam structure of the grid. This basic structure is applied throughout the building in a variety of ways.

Thirty of the building’s 47 floors are terraced on two sides, with terraces fitted with planter boxes for trees and climbing plants. The checquered pattern of the other facades is formed mainly of glass and glazed ceramic infill elements.

The building is currently at a stage where some of the building’s public spaces are being taken into use. The main tenant of the building will be the European Union, which wants to establish a base for European organisations and companies in Western China.

A fascinating aspect of working with Chinese clients is that buildings are approached through symbolism and poetic images as well as efficiency.  A building must have a story. Together with our client, Mr. Ping, we developed the idea of a white mountain with garden-like terraces that rises from the water up above the clouds. Hence, the building was given the name Yun Duan, “Above the clouds”. 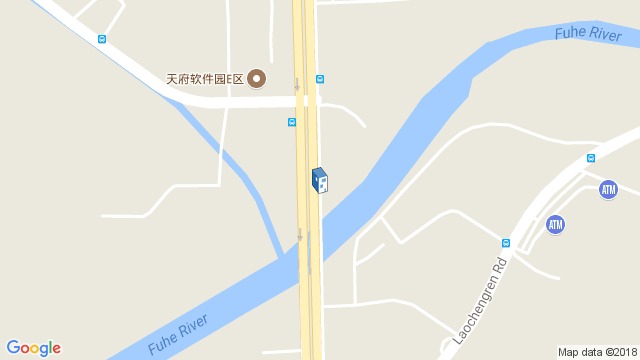 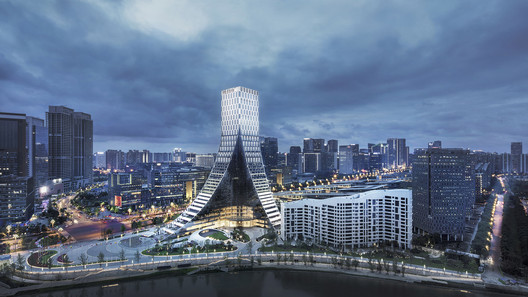