Stanford University experts digitally assembled what is considered the largest world map produced in the 16th-century. The representation of the world of 1587 by the Milanese cartographer Urbano Monte was divided into 60 pages and published in atlas form, but with clear instructions on how to reassemble it.

David Rumsey, director of the university's historical map collection, acquired the map from a historian in 2017. The publication has only one other handwritten copy in the world and has never been assembled in map form.

Unlike the Mercator projection, often used in world maps to preserve the shape of the continents, Mount's projection departs from the North Pole and, although it distorts the regions closest to the South Pole, fairly conserves the relation of the land masses to the oceans.

The scanned pages form a map of more than three square meters and are available online, as well as the composite planisphere, both free of copyright. "We are convinced that any material that is free of copyright should be on the Internet with the highest quality possible available to everyone," said Salim Mohammed, chief curator of the institution in an interview with the El País newspaper.

"It is the largest world map of the 16th century," said Rumsey, and "is also artistically large; has eclipses information, information about the sun, the direction of the winds and the day length in the different regions of the world."

See the map on slides and mounted in the shape of the globe, here.

News via: Nexo and El País. 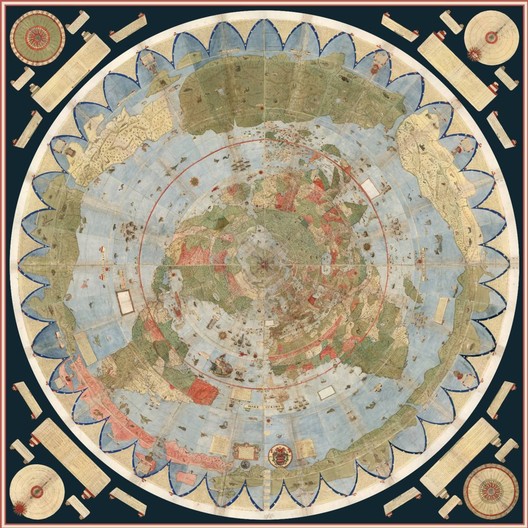