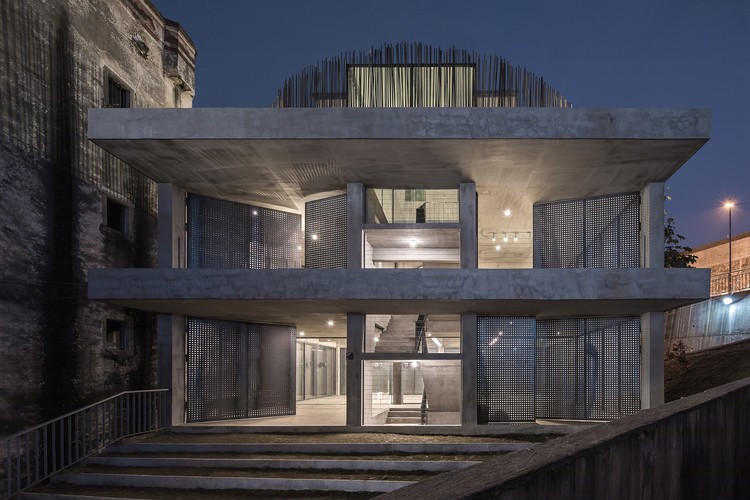 Text description provided by the architects. A pavilion called "Dom-Ino" is presented by 2017 Bi-City Shenzhen Biennale of Urbanism\Architecture (UABB) - Sub-exhibition in Shangwei Village. Different from conventional buildings, this pavilion has no walls, but 24 huge iron doors. Doors can be either opened or closed at any angle by rotating, which allows the space to “breathe”.

"Dom-Ino House" proposed by Le Corbusier in 1915, brings infinite possibilities of free plan and elevation to architectural design. 100 years later, an old building left with unfinished concrete structure frame, found abandoned in an ordinary village of southern China, is strikingly similar to the "Dom-Ino House" prototype, and is demonstrating its application of the "Domino System" in the Shangwei Village, like a specimen.

Benyuan Design and Research center has carried out a series of renovation strategies to this old building: 1. Retain the original structure of the concrete frame; 2. Use 24 giant iron doors to create a space with different spatial combinations for the multi-functional use for art and education.

The Dom-Ino Pavilion becomes a flexible platform for communications between different groups of people and different cultures. The ground floor has a studio, which can be used as the client’s office or public educational space. The newly added 16 rotatable doors on the second floor can enclose and split space for various activities, like art exhibitions, community meeting and small performances, etc. And the roof terrace serves as a community social area.

Take a glimpse through any open door, you will see a unique image of Shangwei Village: a lonely papaya tree; a mottled corner of old Hakka house; a factory building facade with pink mosaic tiles; or houses of European style built by villagers. Through the giant doors, the framed views reveal the vitality and conflicts of this village.

The doors are covered by perforated patterns. In the daytime, sunlight goes through the small holes and leaves shadows on the ground. The light and the shadow, following the rhythm of time, respond to the surroundings in an interesting way.

After sunset, the light coming through the holes will vaguely form the face of Le Corbusier. Through the eyes of this man, who constructed the modern western architecture theory, people will catch a vivid image of this southern village of China. 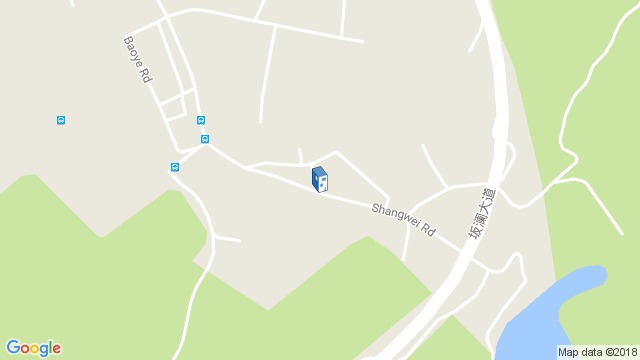 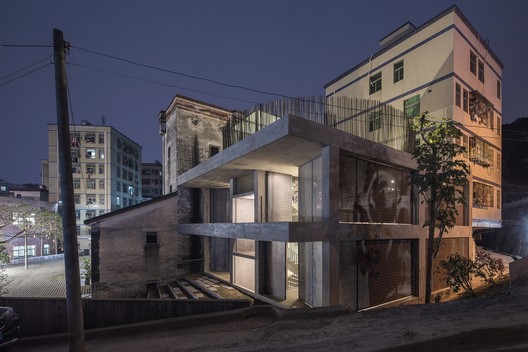 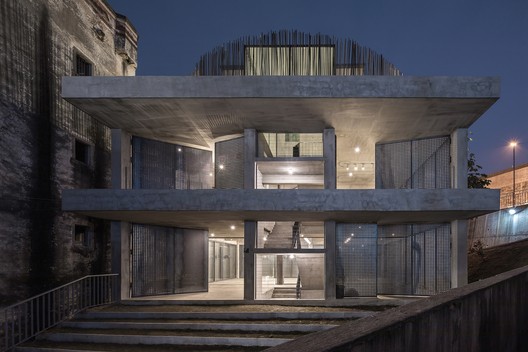