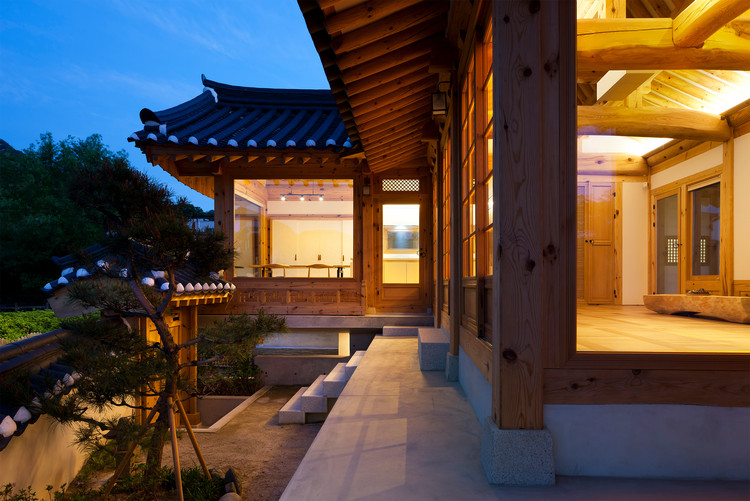 Text description provided by the architects. Knock Knock Heon is located on the border of Seoul, surrounded by an exceptional landscape made up by a forest in the foreground and the famous Bukhansan in the background. Both the architect and the client agreed that the relationship to the mountain would be the guiding line of the project. The building shape is the result of the combination of two conditions. The first one is the relation to the mountain and the second one is the shape of the plot. In order to reduce the density of the house, the spaces are articulated between two Madang (void between the constructions).

The first one is the residual spaces generated by the relationship between the serrated typology and the Damjang (Korean boundary walls) taking the form of a fragmented courtyard and reinforcing the visual connection from the house to the mountain. The second Madang is located on the backside of the house. More introverted, the sunken Madang is like a patio bringing light and air to the basement spaces. The house is divided into two parts. The level difference between the house floor levels and the road were carefully calculated in order to find the balance. Namely: A constant visual connection to the mountain, the penetration of the light into the inferior storey and an acceptable gap between the level of the road and the entrance.

The inferior storey was designed like a bedrock supporting the Hanok. Fulfilling all the functional need of the house, the basement could be used as an autonomous part. As the Hanok is slightly detached from the ground, the light and the air can penetrate into the interior spaces through a clearstory window. Organized around the sunken Madang (patio), the cryptic spaces are bright and comfortable, and does not give the feeling to be in a basement. In order to create a fluid and comfortable space, an anti-chamber was needed. Carefully positioned, the vestibule and staircases are essential parts of the house, not only they act like as generous thresholds between the two floors but also it allows the superior spaces to focus on its relationship with the mountain.

The evolution of the structure material highlights the soft transition between the inferior to the superior part. Indeed, starting from the concrete of the basement, we are passing through the brick walls of the interconnected staircase to the wooden structure of the Hanok. The traditional Numaru (a space with a wooden floor that has a panoramic view) inspired the dining room. In this house, the Numaru lays as an object on a concrete plate. This project shows the capacity of the evolution of the traditional Korean Hanok. Thanks to this new shape and the new technologies, this house was able to free some architectural and mechanical constraints from the traditional Hanok and produce more comfort, light and space. Knock Knock Heon fits the need of the modern society but in the same allow a coexistence between the traditional and modern lifestyles. 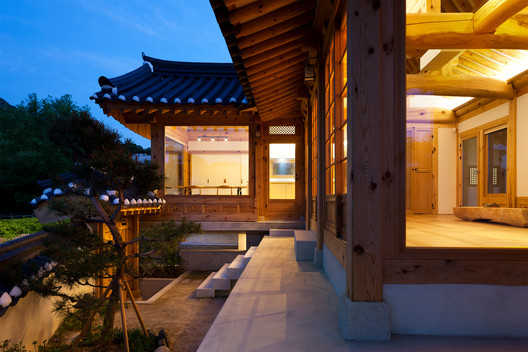