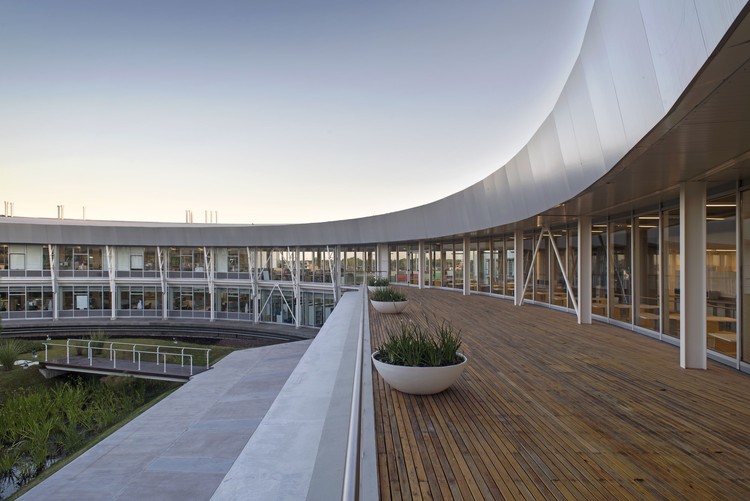 Text description provided by the architects. THE IDEA

The projected idea is the consequence of considering the institutional character of the laboratory building, Headquarters of Y-TEC YPF Tecnológica, whose objectives are the research, development, production and commercialization of technologies for oil and gas.

To this end the building has an entity for its criteria of innovation and modernity that constitute it in a "milestone" of the Technological Pole has requested the research, and therefore the stake in the dominant landscape of the facilities corresponding to the Refinery Of La Plata, that have as an access and axis to the Avenue of the Petroleum. With the consequent expressive conditions the project includes an adequate evaluation of the functional needs where the laboratories of Downstream and Upstream with the transversal Laboratories of Materials, Analytical and Environment, next to the office areas. With a criterion similar to the location of Pilot Plants with their peculiarities, their volume, security, internal accessibility and from the outside.

It is an annular volume generated by the concentric levels that enclose a garden area, which allows the development of an extension of the natural illumination, towards the views of this interior-exterior space and in which the conditions of nature are rescued It surrounds the building, plus contributions of the exterior design, and in which it admits the transit between sectors or the ludic permanence. The two annular levels, which make up the inner park, from the outer perimeter successively of the areas separated by a also concentric circulation, which attends both levels, and which incorporate the connection, space and natural light to the two Sectors, laboratories and offices, areas that are functionally related. One of the salient features of this provision is the possibility of having its own places and comparisons in a spatially generous and flexible environment.

Access to the building from the parking lot is done by a pedestrian walkway that is entered in the volume from the northwest through a semi-covered space of double height that transposes the perimeter to reach "lobby", the place from which Verifies The spatiality of the building, the almost simultaneous presence of the exterior space and the interior of the garden and the relationship that connects the different building sectors: laboratory and office areas, and personnel areas, common equipment surfaces: auditorium, dining room, library

And gym Their respective changing rooms. Space modules such as surfaces are designed for new restructurings in the sectors, which are compared by the writing techniques: AA, liquids, gases, electrical and weak voltages. On the outer perimeter, gas booths have been installed that feed to various sectors of the plant whose construction and ventilation conditions are special; They are accessed by a vehicular circulatory ring.

On the southwest side of the building are located in a linear and tangentially wide of the building, the Pilot Plants and engine workshops, double height locations designed to accommodate the facilities that allow the realization of pilot trials of a "scale bank" prior to Take industrial dimension. Construction and special design conditions are planned.

Control rooms, separate from the experimental area, are incorporated into the same. This sector is reached from the interior of the building pedestrian and by the vehicle, from the Southwest, access from Del Petroleo avenue, tangent to the parking module planned for the first stage. 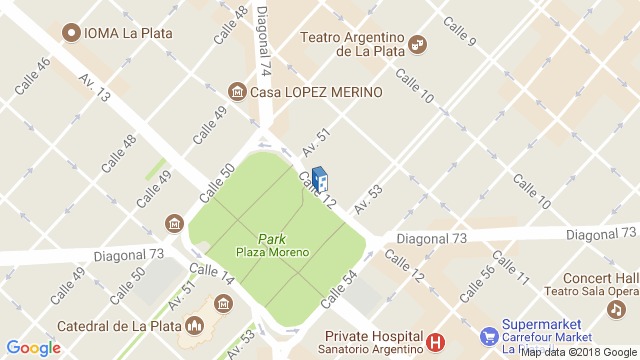 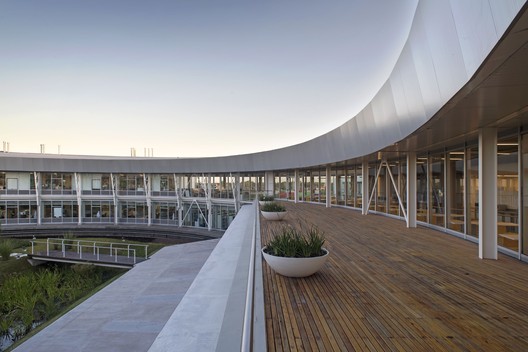