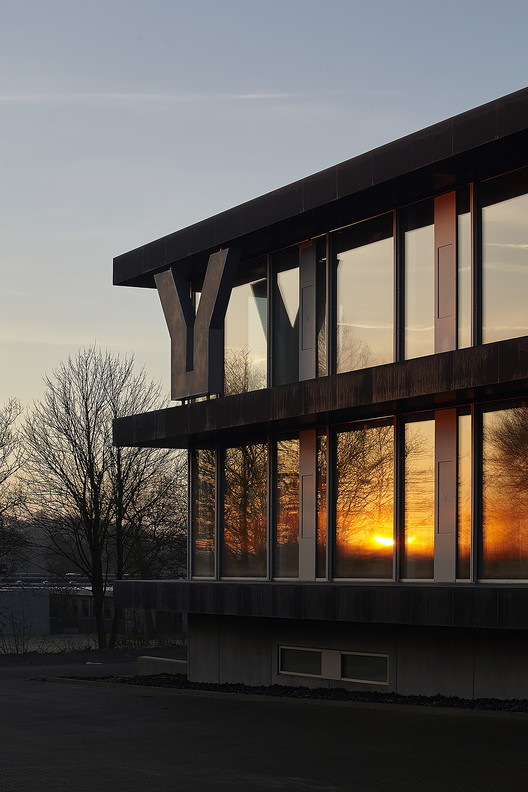 Text description provided by the architects. Dynaudio A/S is one of the leading manufacturers of high-end hi-fi solutions for a broad spectrum of customers, including car brands such as VW and Bugatti.

The new Research and Development building is located as an independent, rectangular building volume with three levels, just east of Dynaudio´s existing administration building and connected with it via a transparent glass walkway.

Architecturally, the building consists of three elements: The base, the decks and the cube. The office facilities are located on the first and second floor as open, flexible work areas on ‘light decks’ with a view of and in close contact with the green surroundings.

The ‘decks’ seem to soar over the ‘base’; the building’s more closed ground floor, containing all phonometer and test facilities. The plot’s sloping terrain allows both the driving of test cars directly into the basement and an efficient security shell for the test rooms in the ‘base’.

Project and silent rooms supplement the office areas in a continuous wooden strip-clad core, which provides a perceptibly friendly character to the working environment on all floors, as well as a good acoustic indoor climate.

Between the wooden strip core and the phonometer room, the building’s main hall with a light, sculptured main staircase of steel and glass gathers all the floors together. Daylight shines through a large skylight over the stairway all the way down through the inside of the building to a small square formation on the ground floor.

ARCHITECTURE AND MATERIALS
Both inside and out, the aim has been that the building’s modern architecture mirrors the building concept and the high quality and finesse of Dynaudio's hi-fi products.

The base is constructed of light grey concrete panels so the effect is that it ‘grows’ out of the ground. The office decks on the ground floor and first floor have façades and eaves made of dark aluminium panels that ‘soar’ over the base and give the building a distinctive horizontal character. The colours relate to the office façades of the existing administration building’s dark façades and create continuity between what is new and what exists.

Between the floor decks, a distinctive floor-high Dynaudio logo marks the main entranceway to the building complex. The cube is carried out as a contrast to the office façades in white concrete panels and appear as a closed, precise form that retains the building.

Interior walls appear generally as painted white, and together with the phonometer room’s white concrete walls and the room-high glass sections, they provide a light and friendly interior in the work areas with an unobstructed view of the green surroundings.

In the design of the large phonometer room, work was deliberately done to have a yin-yang duality between the light exterior and the dark interior. A transformation of human life energy and creativity in the finished product. From idea via tests to concrete physical form. 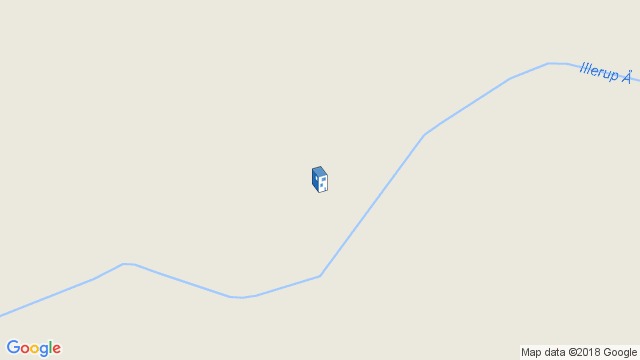