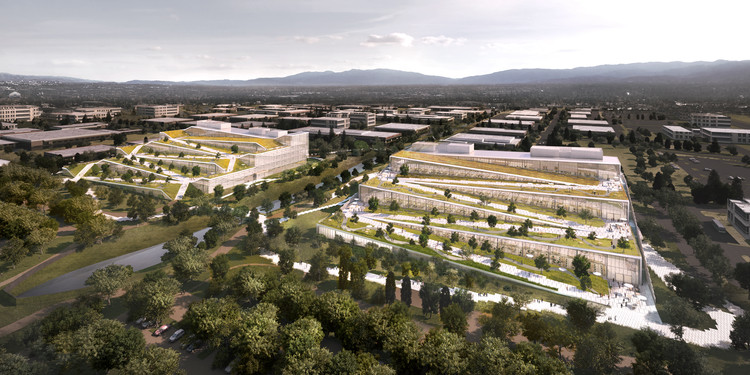 And as in many of BIG’s most successful projects, the design concept centers on fostering activity and maximizing accessible space, including on its ramped roof where Google workers will be able to walk, bike or rollerblade between levels. The development is also aiming for high standards of environmental sustainability, including a LEED Gold rating, an integrated public transportation system, and a native, low-water landscaping plan.

By bringing the roof down to ground level, the buildings will become a visual extension of the surrounding parks and neighborhood, a site that Google envisions as a future mixed-use community where its employees could both work and reside.

“Housing is part of our thought process in Moffett Park,” said Mark Golan, chief operating officer of Google’s global real estate investments & development unit, to the Mercury News. “A new mixed-use community where you have live-work capabilities, makes a lot of sense. Housing and transportation are two huge issues for the Valley overall, and they are huge issues for Google. One of the best ways to address this is by creating mixed-use communities that allow people to live close to where they work, which allows for a vibrant community and also helps the transportation.”

The land for the project was acquired in a $210 million deal with NetApp earlier this month and in a larger land grab purchased in July of last year, totaling 40.5 acres. The Caribbean is envisioned as part of a larger strategy for the expansion of Google’s presence in the city. As part of their community outreach initiative, Google has already contributed over $1,000,000 toward housing for Sunnyvale's homeless population and more than $750,000 toward educational projects.

“This is the start of a process with the city of Sunnyvale,” added Golan.

Joining BIG on the projects will be Clive Wilkinson Architects (interiors) and landscape architects OLIN.

The complex is anticipated to open no earlier than 2021.

Update 1/5/17: A previous version of this article implied Google had yet to make financial contributions to the community; in fact, the company has already already held an active presence in Sunnyvale and the over $1.7 million has already been donated.

New images of BIG and Heatherwick Studio's proposed Google campus in Mountain View California have been revealed in planning documents presented to the city last month. Initially announced in 2015, the project has seen several revisions after first running into difficulty with the city planning board, and then after swapping sites with fellow tech giant LinkedIn. 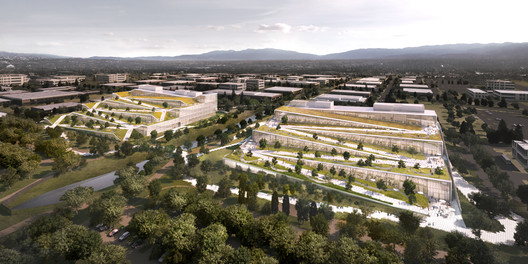