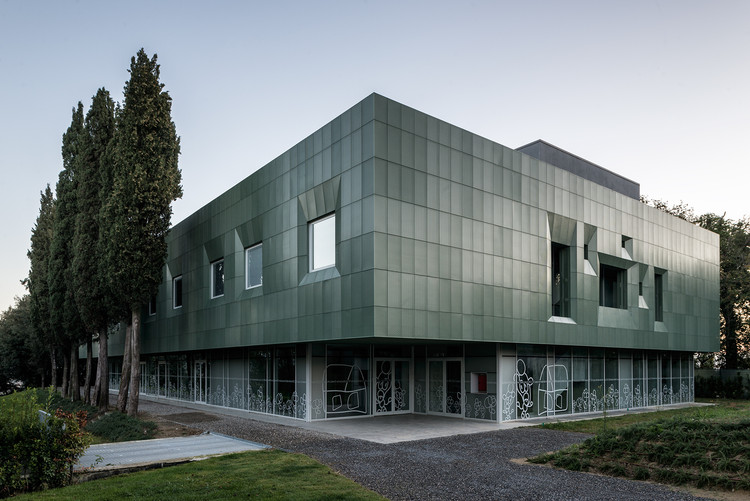 Text description provided by the architects. The project aims to recover and integrate an old site, already used as an orphanage, built on a portion of a hilly area next to the old historical centre of San Miniato. The "CASA VERDE" project, so called because of his historically/social value (CASA / home / orphanage – VERDE / Green / built in a forest of holm oaks), is a search to find links:

1_ with the woods, through the study of the various shades of the  leaf color in different seasons;

2_ with the "guests Girls" by editing their graphic works on the glass facade;

3_ with the city by reusing "vicoli carbonai" (useful and necessary for the maintenance of the hillside);

5_ with the  centuries-old cypress trees next to the structure;

6_ with art through the artist MERCURIO-S17S71 who painting the faces of the "guests" has created a collection of contemporary artworks called “SHAMANS”;

The project is part of a bigger site plan, which is now almost totally realised. Actually is only missing the basement laboratory part on the southwest side of the building, which will be built, according to the agreed program, from 2018.

The idea matrix is to protect, in materials and shapes, (as evidenced by the roof geometries) the original plan and emphasize the extension with shapes and materials close to contemporary culture.

In this elaborate design process the awareness to act inside a fragile landscape helped us; in fact we choose the inhomogeneous green color for the second level of the facade to investigates the ability to insert and mitigate the new volume in the context. The ventilated façade has not only a color value, but it has different levels of reading: the double micro perforated panels gives diaphaneity when your point of view is too close to the building and massiveness when viewed from afar.

Finally, but not marginal element, the micro perforated filter and the openings facade on the main elevation exalt the relationship between indoor and outdoor space: natural light filtered by the micro-diaphragm creates inside, on the main stairs, a well-being and feeling space; the openings on the main elevation create two optical telescopes that project the user of the inside on the outside historical access of the old house in one case and, the old farmhouse (under renovation) in the other.

The indoor spaces, in their simplicity, wanted to recreate the feeling of being in a carded wool space (in view of neuropsychiatric disorders). The basic color used is a light grey (code 7047) with colored lines (green, blue and orange) forming the three different zones where the girls lives according to the degree of their disease. Green, Blue and Orange are also in furniture details and in the icons on the walls/doors (pear/strawberry - dining room, TV - room TV, smile – living room, boy /girls - gym, patch - medical center, washing machine - dishwashing room, pot – kitchen, sofa-living room)  to identify the various functions. 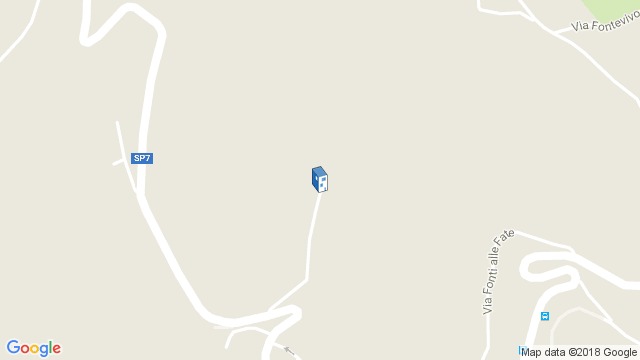