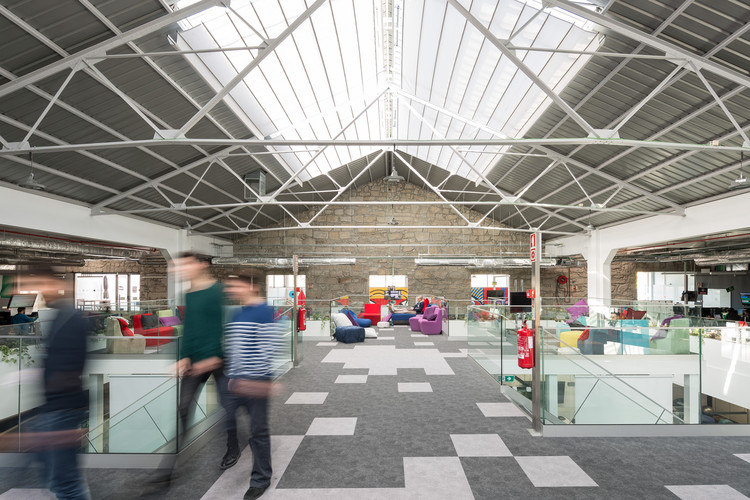 Text description provided by the architects. The blip offices are located in one of the oldest parishes in the city of Porto, the parish of bonfim. This is an urban zone with a strong presence of industrial activity in its past. The building that houses the new office of web engineering, a specialist in high-performance web applications, is an example of this strong industrialization in the city of Porto. In its exterior, this property presents an imposing façade emphasizing the impressive and outstanding masonry work and the huge wrought cast iron windows, illustrative of times past. The interior is characterized by an amalgam of successive increases and alterations, necessities of different and distant times. here stand out their impressive metallic trusses for the support of the roof and the huge counter that creates a majestic emptiness in the centre of the building.

The creative concept base for the architecture project reveals an ambitious program. The same is based on the creation and distribution of about 400 jobs in an “open-space area”, which merge and blend with areas of a meeting, teamwork and leisure. These spaces arise in a non-imposing ambivalence, which invites to work in a casual, almost informal way. Like the exterior, all the original language of the building remains inside. There are white walls and peripheral walls, functioning as a second layer, a cocoon, which receives the large open-space area and the large central court designed for twenty-one meeting rooms, spread over two floors. Here we observe the same organizational logic, work zones and "break-out areas" in a transparent pyramid that broadens but limits the visual horizons in an intricate of spaces and uneven landscapes that consume the various points of the building. So, going through these paths becomes a functional, fun and a relaxed task.

Entering the building, the reception space is crossed, which is characterized by its spaciousness and functionality, as it also serves as a place/area for the presentation/realization of internal or external events, given its proximity to the cafeteria space. In this last space stands out a huge wall with multiple openings, which reveal a little of the rest of the interior of the building and its work zones. At the rear of the building were added more areas intended for meeting areas and for mural art, merging into space an old automobile circulation ramp that used to connect the floors. At the level of the ground floor, other important valences emerge: an auditorium, that can be configured flat or inclined; the "nap room", a room designed for pause and rest; an infirmary; and a gym with shower rooms, ideal for the end of the working day. This project presents a coherence that seeks the symbiotic balance between work and fun and where the architectural idealization of the same plays a fundamental role. 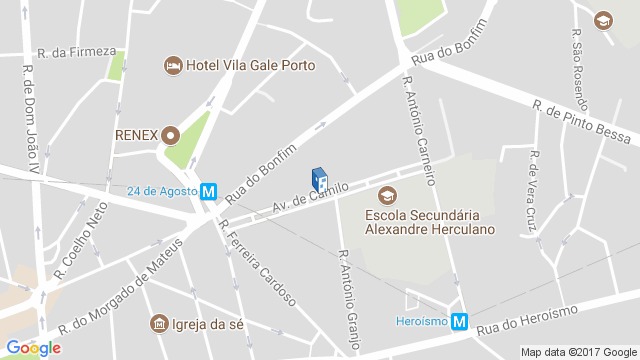