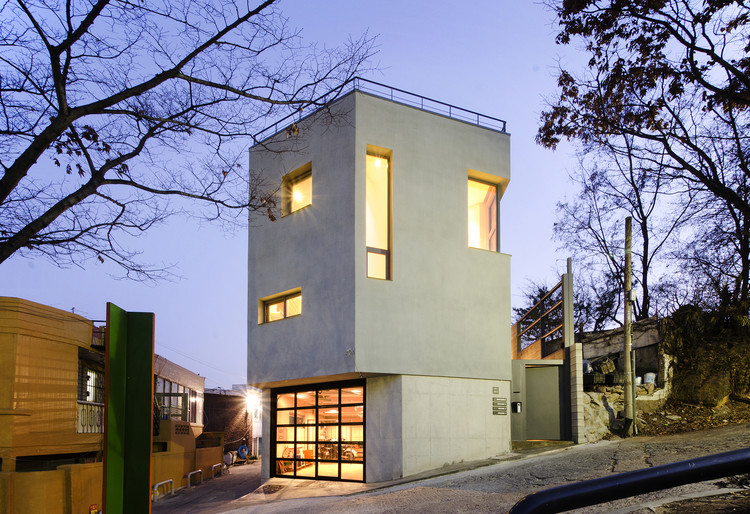 Text description provided by the architects. Hongeun-dong building owner couple are people who know their lifestyle exactly and enjoy living their lives. In addition, they knew how to ask this clearly to an architect. Because of these aspects, Hongeun-dong house started with an effort contain the way the couple deal with their lives.

The land on Hongeun-dong hill has many difficulties for a young couple in their early 30s to establish their newlywed home. It is a place where you have to climb up a steep slope where there is no public transportation for a while. However, there is a beautiful view in front of your eyes that can compensate for the inconvenience. They have chosen the place where they can maximize the value they pursue rather than worrying about minor inconveniences in life. I think it might have been the best place for the couple who always wanted to have a country house with a panoramic view.

There was also a clear demand in the way to organize space. The husband whose hobby is remodeling motorcycles wanted to have a large garage with various functions where he could enjoy his hobby and spend time with his friends rather than just a space for parking in the basement. They also wanted a large yard instead of things what most of people ask for such as large living room or dress room. Various detailed items were designed for the couple who live with several puppies, including a private entrance for the puppies coming after playing in the yard and a small door on the stairway connecting the first and second floors so that only the couple can use the second floor. In addition, we installed a skylight on top of the staircase room that can be open and close electronically for the couple who think of the view that the place has as one of the most important thing, so that they can utilize the rooftop more actively.

We just focused on creating a space that actively reflects the fun lifestyle of the owner couple. That is because the communication with the building owner was the most important reason for this house.

Working on designing the house for this couple in Korea now, which is being called ‘heaven of apartments” was meaningful. A residential space is where we spend the most time, but if we adjust our lives in a space that has been built like a machine and not even realizing this, that would be an unfortunate thing. It was a project that was able to prove that building a luxury house by spending a lot of money is not the only way to build the house your dream, and that you can build a home for your happy life if you understand the life you want for yourself and have the will to realize it