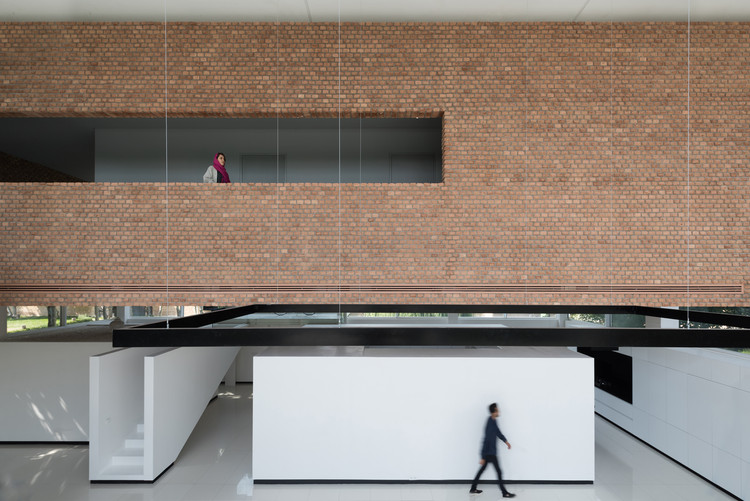 Text description provided by the architects. Having always been a controversial issue, generation gap has widened even further today. This gap along with other cultural and social gaps have led to the belief that living in Iran is the coexistence of diverse or even contradictory lifestyles which create a heterogeneous society. This diversity in lifestyles, particularly in such cases as private versus public, conventional versus modern, masculine versus feminine, seems to be bolder, the effects of which, in approaches to architectural design throughout history, can be observed on the relationship between mass and void, hierarchy, and spatial sequencing. These differences can be viewed in the architecture of various regions in Iran – differences that normally originate in various cultural and religious ideologies alongside diverse regions in Iran.

This issue has manifested itself in the architecture of various geographical areas in Iran due to the fact that these areas had been influenced by their religious viewpoints and regional conditions. In the northern regions where social interactions could develop more freely, life flowed more commonly in public areas, and the semi-public spaces surrounding the rigid hearts of the houses. However, in the central regions of Iran, empty spaces would be situated inside the buildings, and to access them one had to pass through convoluted spaces. In the twofold project of Safadasht, we tried our best to realize these dissimilarities and come up with varying methods of coordination focusing on differences in lifestyles, and link them.

The client demanded an edifice on the first lot for his religious family who practised religious rituals in the lunar months of Moharram and Ramadan, and another one on the adjacent lot intended for late-night parties. The construction which has been built in two separate adjoining structures is comprised of two buildings connected by a bridge. The first building, made of bricks, was designed for the parents, while the second building, intended for parties, and predominantly made of glass, was mostly at the disposal of the junior member of the family. The construction was designed in such a way that if the opportunity presented itself could be separated and sold.

The diagram of the first building is based on a central yard with the construction surrounding it, and to accept the boundaries, brick walls and numerous windows have been employed. The diagram of the second building features a rigid core surrounded by public and semi-public spaces. Furthermore, in the party building, it has been attempted to create a fluid open space through connecting the rigid core to a suspended ceiling so as to stress the dissimilarity of these two structures. Displaying and reflecting the paradox prevalent in our daily life had been the principal challenge in this project, and the incongruity present in the structure of the project is perfectly in keeping with its contrasting applications in a way that each group with their conflicting characteristics is able to live on without disturbing the other, just as it runs through the everyday life of a single family.