Save
The Fade / OBBA 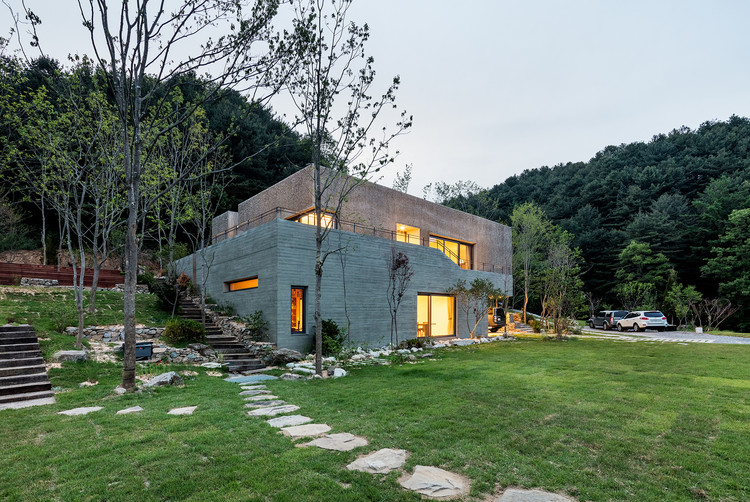 <The Fade> is a house for a musician and a performance producer couple. The site enjoys the splendid nature along the Bukhan River and is located near Gapyeong where Korea’s most famous Jazz Festival is held every year. Since the husband mostly works in Gapyeong and the wife often travels across the world for her show, a place with easy access and tranquil natural environment was chosen as the site.

We sought to provide a calm and refreshing space for the wife to relax after her tours abroad and a house deeply integrated with the landscape for the husband who appreciates nature and loves gardening.

The site is open toward the Bukhan River on its East and embraced by the mountain on other sides with an inclined West side leading to Mt. Muran.

The volumetric organization of the building takes advantage of the site’s landscape yet in harmony with it. We aspired to invite the surrounding nature to the lower level’s living room by stacking two U-shaped masses. The particular form of the mass generated an opportunity for the western mountain slope to be extended toward the center of the building in section, providing a pleasant condition to the adjacent space. Furthermore, the misalignment of the mass in East-West and South-North direction creates terraces or eaves with different function and characteristics.

The mass is divided into two levels based on the degree of privacy appropriate for each room. The lower level houses space for guests and the upper level houses private space for the couple. On the lower level, a wide staircase type courtyard in the middle brings the immediate landscape into the house by drawing the foot of the mountain into the lower level’s living room. By opening the windows between them, the living room and the courtyard can be used as a small stage and seats for the couple and their friends. After enjoying the little performance, the guests can stay in either of the guestrooms located on each side of the central courtyard. A studio for the musician to practice and collaborate with her colleagues is also located on the Easter corner of the house. Next to the studio is a small courtyard, accessible only from the studio space, is hidden serving as a relaxing and inspirational niche for the musician.

On the upper level, a sunken living room open to East and West is located in the middle of the U-shaped mass. A master bedroom, dress room, and study are located on the South with respect to the living room and a kitchen and a dining room on the North. Each space owns independent terrace which maximizes its proximity to the environment. The living room is designed as a sunken area in order to create an expansive space through raised ceiling while preserving the horizontality of the mass that adds placidity to it and not interrupting the visual sequence through the interior space. In order to do so, the couch was integrated with the space by lowering the floor level by its height. The L-shaped dining room at the corner open to the living room on one side and to the kitchen on the other emphasizes the visual connection between different rooms. Moreover, the terraces further extends this sequence—from the living room to the dining room and to the kitchen—towards the exterior and the courtyard which leads you back to the lower level’s living room.