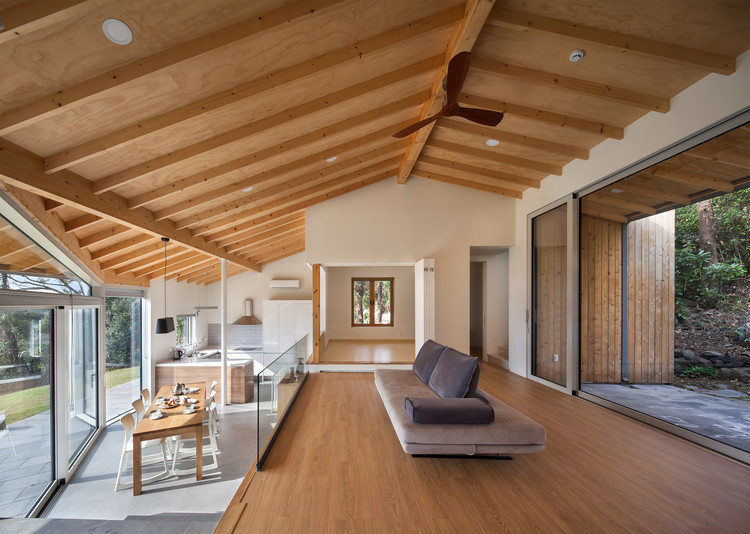 Text description provided by the architects. The site is located in Tosan-ri, an area in Jeju Island with a beautiful, natural and relaxing view of the ocean and Mount Hallasan. Facing the sea, the Tosan-ri house is perched on a slight slope resulting in two uneven ground levels, surrounded by low stone walls and trees. The owner of the land wanted to create “a house for guests to experience a unique lifestyle” rather than a place that simply provides a temporary accommodation. Well-harmonized with Jeju’s natural characteristics and surroundings, the house was envisioned to be a ‘contemporary home’ incorporating elements from Korean traditional residences (called Hanok), such as traditional eaves and wooden floorings.

While enjoying the ocean view, guests would gather around and share meals at the table whereas children would freely roam around the front yard. In the early stages of design, guga was inspired by private folk homes in Jeju Island (called Minga), which have evolved naturally over time. At the heart of the house is the living room (called Sangbang in Jeju dialect) that links to all areas of the house with front and back windows for enjoying the scenery. By embodying the uneven grounds to the design, the house resulted into two sections; the Sangbang in the upper level connects to a room, a bathroom and a staircase that leads to an open kitchen and dining area at the lower level. By adding a third dimension to the flat horizontal layout of the traditional folklore home, the house has become more spacious with a scenic view of the village and sea.

Moreover, inhabitants of the private homes of Jeju lived beneath low, simple roofs to protect and embrace themselves from harsh environmental conditions. Though the designs are not exactly the same, the deep eaves, and the singular roof are features that are directly carried over to this guesthouse, where the final work reflects the architect’s efforts to work around the initial idea. Under a single roof, the owner/host resides in the single floor area of the house, separated by a door that can be removed if needed. The most interesting areas of this house are the ‘Bang’ (room in Korean) and the ‘Numaru’ (room with a panoramic view). They are both important architectural elements in Hanok but have been re-interpreted in different ways.

The Numaru, located in the owner’s part of the house in the west, is an interior space mainly for rest and mediation, with a scenic outdoor view. It has been re-interpreted by using contemporary materials and methods instead of traditional features. On the other hand, the Bang in the guesthouse area shows the “process of evolution” without losing its traditional elements such as its scale, the wooden columns, rafters, windows and Korean paper (called Hanji) used for finishing. Doors and windows can be flexibly opened to fully admire the landscape and can be closed for complete privacy. This space is basically a traditional Korean pavilion (called Jeongja) in a modern space that transforms into a room.