Perhaps the very act of this competition, is a marker in itself – and perhaps the only viable – Michael Madson.

From the Architects: Testbed transforms the WIPP area into a climate engineering experiment site to be initially managed by the Department of Energy. Rather than communicating a warning through monument or obstacle, the project manipulates the geology of the site itself by setting in motion an open-ended assemblage of processes that generate an entangled scientific earthwork comprised of agitated hybrid formations, neither natural nor human-made.

The project deploys an array of carbon dioxide capturing strategies across the WIPP site, including ex situ mineral sequestration, in situ geologic storage, and direct air capture farms, to generate an active marker system that passively stores one type of energetic byproduct - carbon dioxide - in the surface above another: the transuranic waste secured below.  By using climate engineering to create a new geology, Testbed takes advantage of the site's already compromised condition to encumber it through experimentation, doubling down on disturbance to ensure the site will remain undisturbed.  Through their continued growth and transformation over time, these new geological forms mark the site as something deeply strange and unfamiliar, communicating its otherness by intervening in fundamental processes.

From the Architects: For millennia, cultures across the world have attached deep significance to celestial movements and cycles. Ancient civilizations derived meaning from constellations and planets and wove astrology into mythology and religion. In the second millennium, sailors used the stars to navigate an unknown world. Among these stars, the North Star has held the greatest importance as a means of wayfinding. Lodestar relies on simple architectural gestures to communicate the danger buried deep within the site. Tied to greater celestial movements, the landmark is not dependent on language or a site steward to communicate the passing of 10,000 years.

From the Architects: How can an isolated landmark reveal itself as a coffin to seal the radioactive nuclear wastes, and how can the crystalline funeral, reveal and warn the considerable influence of human power to the future generation throughout the 10,000 duration of decay of nuclear substance, and probably, the human being as well?

Salt crystal, which constantly seals the nuclear substance underground, will be regarded as a metaphoric connection between the funerals on the ground and the ones under it. Extra salt crystals in or around the site will be collected to build series of crystalline coffins, to seal the extinct species, one for each year, an ongoing funeral which lasts for 10,000 years, when the central church seals the last human being.

From the Architects: A contrast between monument and terrain signifies a tension between geological resources and human affliction. This monument symbolizes a parasitic operation that reaches deep into the darkest side of humanity. It is a memorial for the exploitation of Mother Earth, the Native American mining communities, the genius of scientists, 130,000 individual lives, and the endless generations to come that are affected by these operations. Volcanic basalt stone wraps the perimeter of the 16-mile site. Within this, large boulders fill the interior. These boulders would erode and slip out of the open corners of the monument, eventually to become cemented into the geological strata; a physical recording of anthropocentric presence and perhaps, absence.

News via: arch out loud. 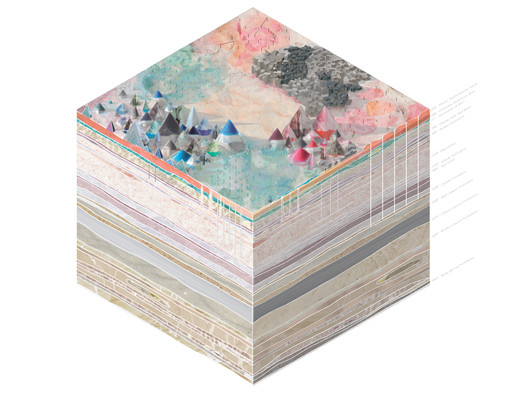