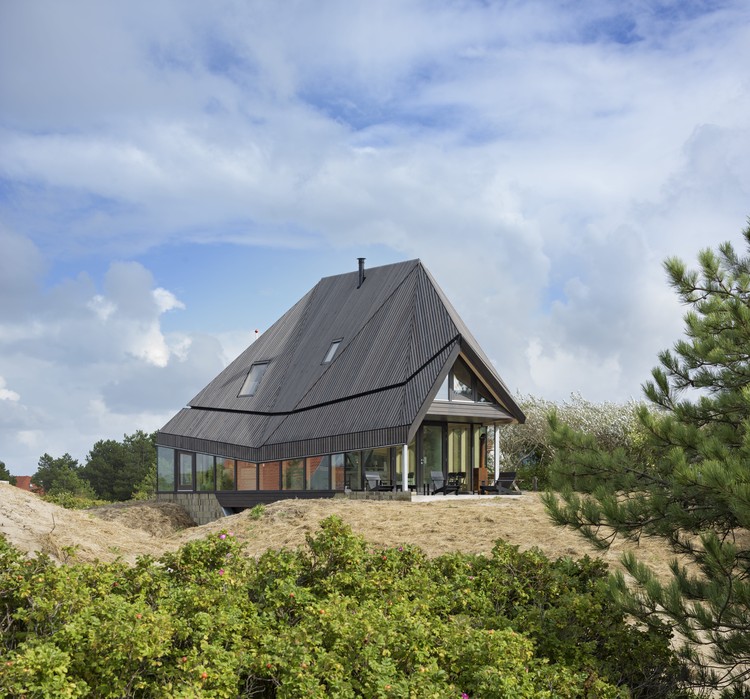 Text description provided by the architects. In the rolling dune landscape on the north side of Vlieland there is a rich collection of summer houses built since the beginning of the 20th century. Most of the summer houses were built by private clients for their own use. An arbitrary order in which there was room for choice. In dunes and dunes, the pioneers had the choice. Mostly the outdoor space oriented on sun with shelter for the wind. Meanwhile, regulations have been laid down precisely what may and may not be built.

On a dune top in the shelter of bushes Vlieland, a summer house was built in the early 1970s. It is a simple cottage that is characterized by a furious, corrugated finish, hood. Due to the color scheme (white) and the position (on a dune top) the house is prominent in the dune landscape

The white facades are plastic shots that have reached the end of their technical life. The roof consists of cement-bound corrugated sheets. The cottage is no less dated. Flattish partitions of plastic sheet material. The moment has come to replace this cottage for new construction.

Basics for the new cottage are a more careful integration into the dune landscape. The building is on a top, adjacent to a dune pan and stands against the backdrop of the forest on the south side. The new house consists mainly of a roof. This roof is basically related to the classic 'The Ward tent'. The cam and trough lines remain well below the maximum dimensions recorded in the destination plan.

The cam and trough lines are variable in height and the ground form creates a faceted roof that fits into the 'faceted' dune landscape. The house is fully finished, including roofing, in wood. The wood is darkened to make it 'up' in the dark forest edge.

The cottage is on the edge of a dune pan. Due to this altitude difference of about 3 meters, an important part of the 'program of requirements' can be realized in the basement and the volume of the dune is minimal. Thus, it becomes a summer house where you can sleep in the attic.

The basement is invisible from the public road and by placing the "front door" there, the volume in the dune is completely unchanged. There is no front or back. It is an open and informal holiday home where the doors from the terrace, welcoming, provide access.

In the façades under the trunk line, only clear glass and wood are used for frames and slats. The frame styles are equal to the large amount of shaving lines on a wall. The roof rails in the hood are also provided with wooden slats on the outside, making it fully visible. By incorporating the storage in the main volume and within the architectural appearance, the new building remains limited to a single single-sided addition to the stunning dune landscape.

A landmark is indicated in the destination plan. Right on the edge of this building spot is the height difference in the dune. Due to a shift over a distance of 5 meters, the north face of the new house is not on the edge of the dune pan.

Due to the occurrence of discussions on 'border cases', the municipality of Vlieland is invited to contribute to a shift of the building spot on the plank map.