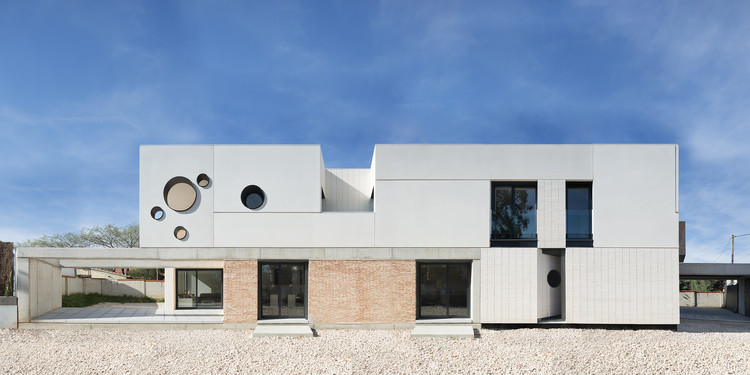 Text description provided by the architects. The house is located in a residential area comprising detached houses. It is accessed from the streets on the east and west sides of the block on which the plot is situated. It has an irregular and slightly longitudinal shape. The compact building was designed according to a basic requirement of the property owners: not break the continuity of the free outdoor space between the two streets, a condition that determined the orientation of the house and its relationship with the exterior. Not having a horizon, IA_house traces the limits of its domestic space in the walls containing the plot, barely three metres in the north and 11 in the south, without interruption.

However, from east to west, the house itself forms part of the perimeter enclosure, from the street entrance in the east to the covered outdoor area in the west. In both cases, the load-bearing beam structure and concrete walls mark these limits. In-situ. Therefore, concrete beams, walls and paving serve as containing envelopes and a threshold for handmade brick structures, and also to guide and order them. These brick structures house the rooms on the lower floor. They serve as a threshold, support and foundation for the upper volume. The latter, formed by white prefabricated envelopes, houses the bedrooms and a study and games area.

The lower structures have sliding steel panels in the ventilated chambers. The handmade brick walls, arranged in the traditional fashion for half-foot brick and with lime mortar, are like canvases confined between the framework and the structural grey concrete beams. On the other hand, the shiny white glazed brick walls were also built with depth in mind and, in this case, form volumes projected according to the geometric position of the brick, with no bonding: six-inch stretchers on the north and south and, again without bonding, headers from east to west.

Unrestrained reinforced constructions that escape from the load-bearing structure. Two ways of building masonry structures. Always brick and mortar. Two ways of shaping them and addressing them from the structure. Thus a polarisation of the house’s interior/exterior relationship is established: transversality in its link with the surroundings and longitudinal continuity in the transit areas and internal visual relationships: we put geometry in opposition with topology, and pit construction and scale against continuity and time.