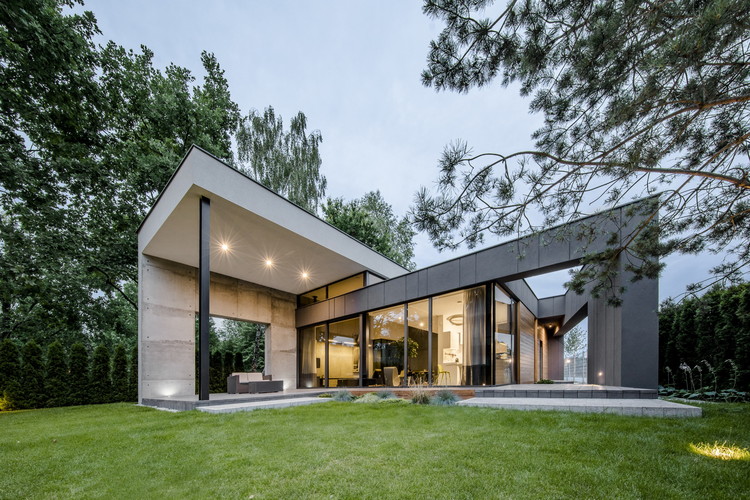 Text description provided by the architects. FIL house is a one and a half story single family home. The most characteristic aspect of the house is its roof, divided along its longer axis into two sections of different heights, creating a sense of two intersecting solids. It is an effect of the home owners wish to have a house that is both open to the outside, and still privately enclosed. To fulfill this wish, the house had been divided into a closed, dark southern block, and a higher light grey northern block. Main openings are located in places of intersection between the blocks, and are strongly framed and directed by outside free standing walls which follow the buildings main shell.

The 4,6m high north part houses a living room, and three bedrooms. The height difference between roof sections introduces sunlight from above the south part of the house into the north-facing rooms. Height of the small bedrooms allowed to introduce mazzanines, which complement their functional layouts. A continuation of the higher roof covers a west facing terrace.

Due to strong western exposition, and a large level of fenestration in the living room, windows there are composed of dimmed glass panels, which harmonize with a dark finish of the low part of the house. A wall of raw concrete serves as a background for the living room with a free standing fireplace, and continues through the windows to the outside terrace. This, along with the same continuation of the ceiling creates a sense of connection with the outside.

The southern part of the house works as a division from the road, which is located very near, and along this side of the house. It houses a kitchen, bathrooms, laundry room, and a guest room. Windows in this façade are long, narrow, and situated right under the ceiling, to provide sunlight, but not allow insight from the road. Although the kitchen has large windows, it is retracted, and the view from the road is blocked by a free standing wall following the main façade line. In the space between the kitchen and wall, there is a small secondary terrace. Both terraces are finished with concrete slabs, and connected via a wooden deck. Entrance to the building is distinguished by use of wood on the elevation.

Form of the building is also strongly driven by the shape of the small plot of land it is built upon. The first noticeable aspect of the plot is its ununiformity. Its west end is widest, and so it was left as a garden, complementing the widest part of the house with a living room and a kitchen. The house narrows to the east as does the plot. The east end is filled to possible boundries by a garage. To use as much space as possible, it was decided not to build a gate in the fence, as instead, the line of the fence turns inwards to meet the front wall of the house, so that a garage gate is accessable directly from the road.