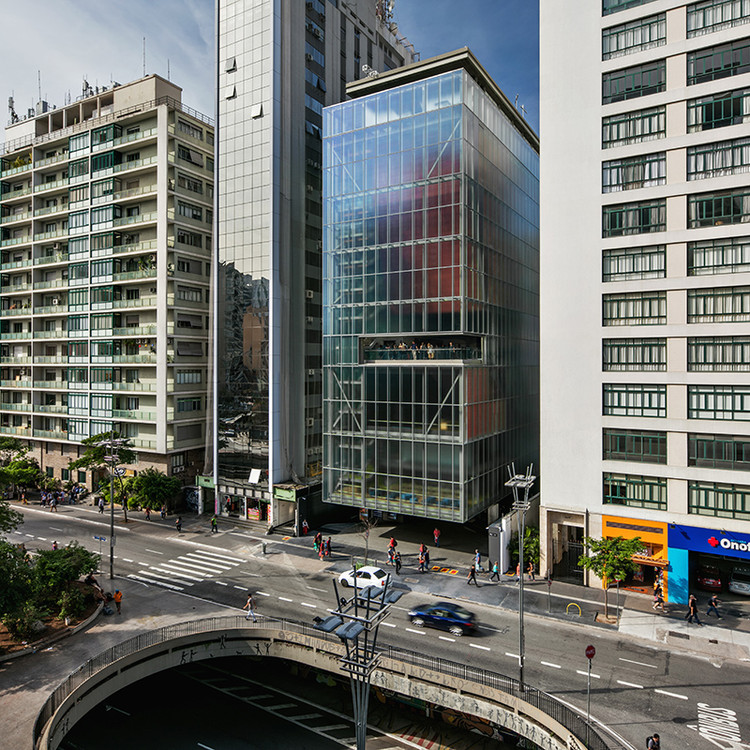 Text description provided by the architects. Project for a Museum on Paulista Avenue- the new IMS of São Paulo.
The creation of a new museum is always an extraordinary event. It is fundamental the role they play in contemporary cities, not only for promoting events related to art and culture, but especially for bringing interest and vitality to urban spaces.

It is in this context that the new IMS headquarters will emerge. An institution already consolidated and of marked presence in the Brazilian cultural scene. Owning a precious collection and with extensive experience in the promotion of exhibitions and cultural events, IMS does not have an exhibition space in São Paulo today that is consistent with its possibilities. The new headquarters will supply the concrete need for more space, but it will be much more than that: it is born, above all, the desire to create a place that represents the values and the spirit of the institution. The museum emerges from the inside out and for this reason the new headquarters must be thought in the same way, having as main motivation to be a programmatic and symbolic platform for the IMS.

That way, we imagine an accessible museum, anchored in the present, that has a free and direct relationship with the city and, at the same time, offers a calm and welcoming internal environment; a museum capable of balancing the vibration of the sidewalks with the nature and scale of museum spaces; a space that demands a very particular quality of light and perception of time; Finally, a museum of an outstanding character, that provides a unique and personal experience for those who visit it.

In order for the proposed building to meet these qualities, we proceed to the analysis and interpretation of two fundamental parameters for the design of the project: the program and the urban context. What was of interest here, beyond the complex functional requirements presented, was to determine the articulations and qualities desired for the museum's internal spaces, as well as to define what kind of relationship was intended to be established between the new building and the city.

From the analysis of the program we elaborate a quantification of the necessary areas and a grouping of the spaces according to their nature, creating a gradient that goes from the most open and permeable to the most restricted and controlled. This diagram represents the intention to reinforce the connections and continuities between the programs open to the public and to preserve the privacy and control of the administrative and service programs. As a result of this reasoning, we must distribute separate circulations to the public, for administrative and areas for loading and services.

From this analysis, we also concluded that the spaces should be generous, especially in the exhibition areas, given the role of protagonist that will have within the scheme of the new museum. They must also be flexible and have the controlled environment, with the ideal conditions to accommodate the collection and the different modalities of exposure.

With the objective of creating a significant group of programs, we gathered the auditorium, classrooms, multimedia space and library into a single, integrated body, forming the Institute's new Media Library. This set creates an important counterpoint for the exhibition rooms, able to balance the attention within the museum. So, part of the library can work as a convivial space for those who attend classrooms, as these, when integrated, become a small suspended auditorium that relates simultaneously to the library and the foyer. It was also our goal, to bring the various forms of expression and media in a more fluid and continuous space, without losing the necessary restraints for the proper functioning of each space.

The Paulista Avenue is one of the few places in the city where we find a huge variety of people and programs living in one place. One of the few places where we have a mixed, plural and more democratic city. This rare quality, coupled with the generous scale and the privileged geographical situation, makes Paulista Avenue one of the most interesting and lively spaces in São Paulo.

Adjusting the focus to the surroundings near the new museum, we identified some singularities of that section of the avenue. The intersection with Consolação Avenue translates into a great movement of vehicles and people, due to the proximity of the various subway stations and the bus corridor. The sidewalk, at this point, is narrower, due to the presence of the tunnel just ahead. We are right at the end of the avenue, from which opens a wide look to the valley of the Pacaembu and the spike of Dr. Arnaldo Avenue. The Conjunto Nacional is two blocks away; the MASP, a little further on.

The plot, with 20 x 50 meters, is flat and surrounded by buildings from 13 to 18 floors on all sides: a gap in the sequence of profiled volumes along the avenue. This is a truly extraordinary location. On the other hand, when we get inside the lot, at the level of the sidewalk, we realize that the space offers few openings and connections with the surroundings. The questions that we asked at the beginning of this analysis are put again: what is the relationship that we want to establish between the museum and the city and how does this decision affect the articulation of the museum's internal spaces?

The solution was to transfer the ground floor of the museum - its main articulating element - from the base to the center of the building, fifteen meters above the level of Paulista Avenue, creating a totally new and open relationship between the museum, the city and its inhabitants. With this displacement, we leave a claustrophobic and restricted condition imposed by the boundaries of the lot, to conquer the view of the city, at the same time we create the possibility of a new articulation of the internal spaces of the museum.

This operation has the effect of releasing the level of Paulista Avenue for it to work, together with the first underground, as a distribution platform of the different circulations that feed the building. Conceived as a large urban hall, the level of Paulista Avenue becomes extension of the sidewalk, leading the visitor through escalators and elevators to the heart of the building. It is there that is also the museum's restaurant, fully open to the public, reinforcing the multiple character of the avenue.

In this transfer, which refers to the familiar movements of subway stations, there is a first transition from the scale of the city to the scale of the museum. Along the way, the sounds and the agitation coming from the street fade, the intensity and nature of the light change, until you reach the raised ground floor, facing the city, which opens in a totally renewed perspective. Released from a closer and direct confrontation with the street, it was possible to create a vibrant and energetic space, but adjusted to the intensity and the environment desired for the museum. The scale and the time have changed. We are inside the new IMS.

As has been said, with this transfer we rebalanced the gravity center of the building, bringing the main programs closer to the ground floor. This result, once again, goes beyond merely functional aspects. It is a question of adjusting the displacements and journeys to the scale and time that are most pertinent to the museum. From the elevated ground floor, the visitor's perception of the program spaces is clear and direct. The ground floor has been converted into a convivial and distribution plaza, which also has a shop and café; above this square, hovering over it, are the exhibition spaces, protected in a closed volume; below, the programs of the Midiateca are grouped, which act as a great meeting space dedicated to cinema, music, literature and, more generally, research and production of knowledge.

The warehouses and other areas of support to the museum - such as the temporary storage space for works of art, library collections and varied stocks - are in the 2nd underground. This floor is connected to the rest of the building by means of a large cargo lift and a set of elevators and stairways restricted to staff and technical personnel.

The spatiality of the museum is given and perceived, above all, from the voids of the building, which are the spaces of movement and encounter that spread between the program volumes and the facade of the building. The facade materiality, solved with a translucent double-layer glass skin, gives a quality of light that corresponds exactly to what we wanted from the beginning of the project, when we imagined the interior of the museum as a backwater - a quiet and welcoming space for the Visitor. In the same way, the light that takes care of these spaces carries with it the city's trace, bringing into the museum the memory of the world around it.

The choice of some materials reinforces this desire to build meaningful relationships with the city. In the elevated ground floor, we recovered the portuguese mosaic floor that for a long time was used in the sidewalks of Paulista Avenue. On the other hand, we use basalt, a material that makes a direct correspondence with the cement of the sidewalks, to cover the entire floor of the museum at street level, in such a way that we have a continuous space.

Finally, there is the question of how the building is placed in the city. The use of translucent glass as second skin causes the museum to be perceived as a well-defined volume, intact, with the necessary force to establish its place among the neighbors and other buildings of Paulista Avenue. On the other hand, its properties of light and translucency create for the building a second register, which is changeable depending on the nature of the environment and the position of the observer. As a result, the interior of the museum is subtly manifested in urban space. 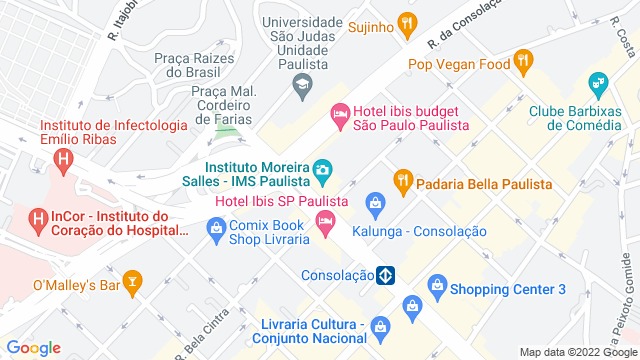 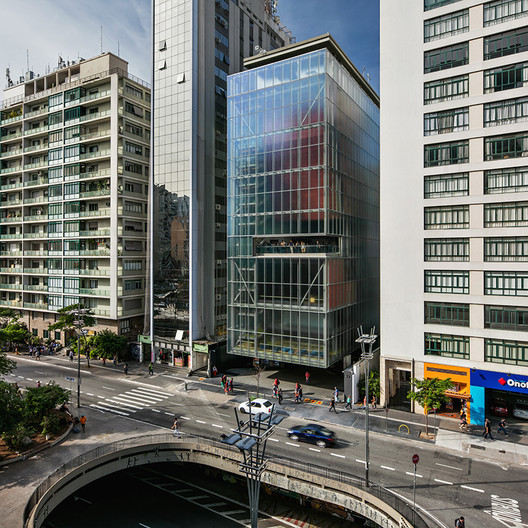