Save
The Vault House / OBBA 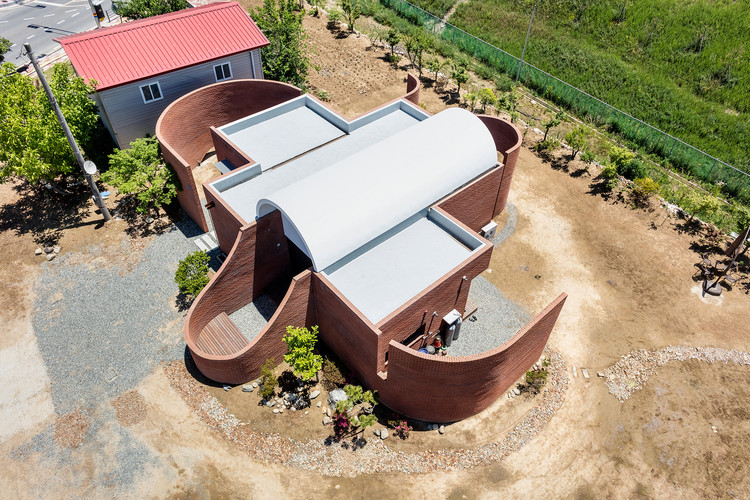 Text description provided by the architects. When did this happen? The faces of our city have lost their characters. Dull façade of apartment buildings surrounds city and streets full of cars are gradually turning into a dreary parking lot. The moment where a street meets a building is cut off by a faceless wall and the space between houses has turned into unidentifiable space with a wall separating them.

If you look into the definition of a wall, it is an architectural structure designed to protect inside from outside primarily from intrusion, to define a boundary and to block views from outside for personal privacy. Between what and what is a wall defining a boundary? From what does a wall distinguish something? Is a wall used to distinguish the boundaries of my private land, or to show off my status? Or is it used carelessly regardless of its function?

The project is a small house of 82 m2, in Bipa-ri, Hadong in Gyeongsangnamdo. Three brothers in their 50s who were born and raised in the town but now live with their own family in the city wished to build a new house for their elderly mother on where the old house used to be.

The site is basically surrounded by endless farmland on its all sides. However, trains pass by on its Southeast and Bipa Island boasts its small but impressive forest of green pine trees all year round on its Northwest.

Our biggest concern about this project was defining the relationship between private space and the rest in a countryside where all sides are open to crop fields. Fence wall is generally installed along the boundary of the entire site, away from the actual house. In this case, however, we incorporated the fence wall as a part of the building in order to create several types of intermediate/transitory space between private and public space.

The building has an enigmatic face. It is difficult to tell which is the main entrance or how is the house arranged. Curvilinear brick walls wrap around the house and an elegant/neat/orderly entrance is hidden next to a slit on the brick wall.

The house is composed of a living room with generous openings toward the North and South, and a master bedroom and two guest bedrooms on the East. Each end of the living room has a small pocket garden formed by the curvy brick walls. The curvy wall on the North has an arch shaped opening on top that allows view toward the greens of Bipa Island from the living room. The one on the South with an arch shaped opening on the bottom blocks wind and noise from the railroad while the opening visually and physically connects the space with the backyard behind the wall.

A guest bedroom on the East also has pocket garden which is enclosed by a semi-circular wall with a diameter of 7.5m, extended from the house’s wall. The extended wall prepares for future changes that may come due to the newly built railway station, blocks noise from the streets that will be expanded due to the city’s plan, and ensures privacy of the residents. There is a small opening on the bottom of the wall for neighboring dogs and cats to freely pass through. One of the master bedroom’s wall and kitchen’s wall grows out similarly to screen the bedroom from the streets and to provide shades and storage space for the kitchen, respectively.

By designing fence wall, which is commonly treated as an entity independent from the building, the house could be more functional and acquire more flexible form. Furthermore, the transitory spaces created by extended curvy walls allow richer spatial experience and add character to the moment where they meet with public space.

We look forward to see intriguing moments characterized by with intermediate spaces between two different spaces and a connecting point anticipating to be filled with excitement.