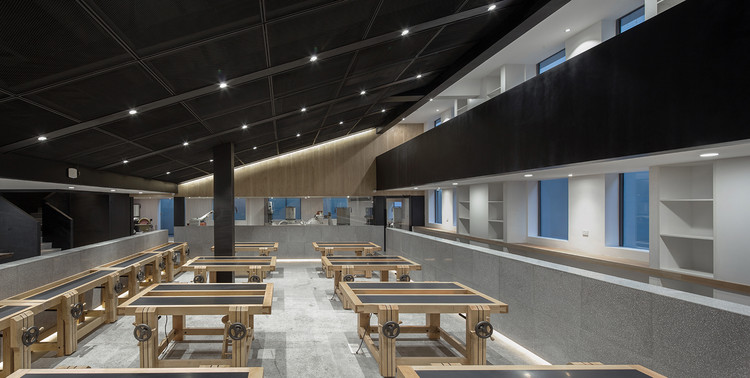 Preparations
The M.Y.Lab Wood Workshop is located on the first floor of a warehouse, which used to be the Dongfeng Sofa Factory in Changning District, Shanghai. Adjacent to the warehouse, it is stood a new-built 150㎡ attached room, forming a triangle lacunain-between. The task is to refurbish the 300㎡ one-storey warehouse into a two-storey commercial space, which is to be operated as a wood crafting learning centre.

First Impression
What left the most impression in the site on the first visit was, instead of the space itself, the overground separated from the old warehouse by just the warehouse’s enclosure. Trains pass through the overground rail every other minute or so, leavingloud rumblings behind echoing in the place, as a reminder of the long way of globalisation and modernisation this city has come.

In addition, to the south of the site, a whole block of interior pavement left by a demolished market signifies, as a historical monument, the city’s progression on self-renovation. All in this very place, the past, present and future is gathered and revealed.

As the nostalgia atmosphere deepens, wood crafting centre, the future role that this space will play, is tasked with a similar subject. Wood crafting, as a conventional technique that left behind by our modernised urban lifestyle, is in need to be rediscovered as a piece of treasure lost in time.

'Archaeological Excavation Site'
This design proposed an implantation of an 'archaeological excavation site' recreation into the original space with the height of 5 metres. The main wood crafting room is forged into a secluded space, by being positioned on the sunken floor behind the entrance wall, enclosed by a low wall made of terrazzo.

Above this space lays a massive pent roof, formed by a black metal mesh. From the top of the ramp, sunlight spills into the room, endowing it with the beauty of ritual.

The staircase attached to the entrance wall leads to the corridor on the first floor, where visitors can lean against the fences, overlooking the entire 'archaeological site', where the wood crafting operations are on display. Visitors can also work on their on projects, or simply have some reading or a chat using the crafting tables by the window.

After the formation of the main space, next is to design its interfaces separating it from other spaces. Three of the most common materials, metal sheets coated with black fluorocarbon, oak panels and white paint, are put in use.Along with the terrazzo floorings and walls in the main space, as well as the black metal ceiling above, a harmonious theme of materials and colours is constituted.

‘Arch Bridge’ at the Entrance
A narrow and lofty corridor is set as the entrance to the main space. On the wooden wall, a series of display cabinets and LED screens are installed continuously. Meanwhile, a space under the screen closest to the entrance is designed for exhibiting furniture works.

Facing the other end of the corridor, there is the reception. High above which, it is installed a set of timber structure, taking inspiration from the traditional timber arch bridge. It also reveals part of its side to visitors’ first glimpse on their way in, implying the awakening of traditional crafting techniques.

Spatial Planning above the Pent Roof
Utilising the triangle space formed by the slopping ceiling of the main space, a two-stepterrace is designed into the classroom on the second floor, increasing its internal area. The triangle void also provides a hidden space to locate other practical equipment, such as air conditioners, in order to purify the appearance of the interior surfaces.

Two Black Boxes
In addition, two black metal “boxes” are introduced into the route. One, with a staircase inside, is located between the two storeys as a transportation junction, whose tilted top parallels the form of the ceiling in the main space. The other “box”, functioning as the tearoom, is located between the attached room and its yard as a pathway. Half of the box interlocks with the interior, bringing into the space formative diversity. While the other half is exposed in the yard, with a niche-like space for resting right under a skyline. During breaks, students can have a bit of time with themselves in this nook.

Floating Structures
In order to enhance the visual sensation of floating of the second storey, the load-bearing structures design for the added interlayer has become a significant matter. The solution is to lift up the primary beams of the second floor with only five columns, two of which are hidden within walls. Multi-ribbed secondary beams grow out from the primary beams, attaching to the original walls as reinforcements. As a result, the second floor’s load bearing is accomplished by both the walls and five columns, leaving the entire main space seemingly lightsome. 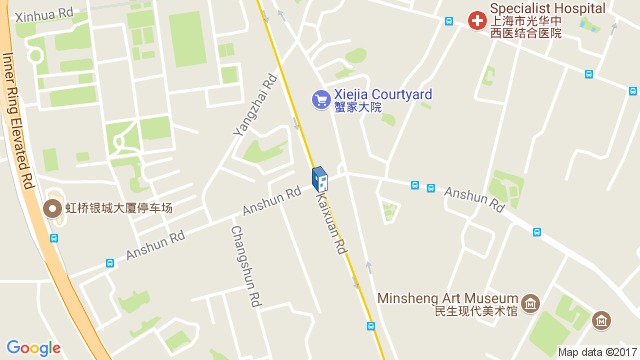 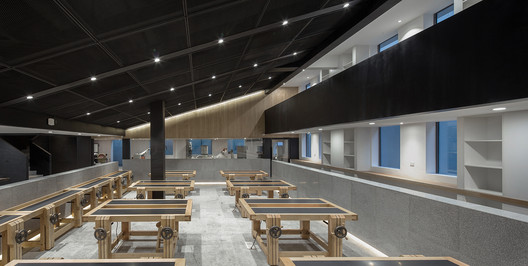