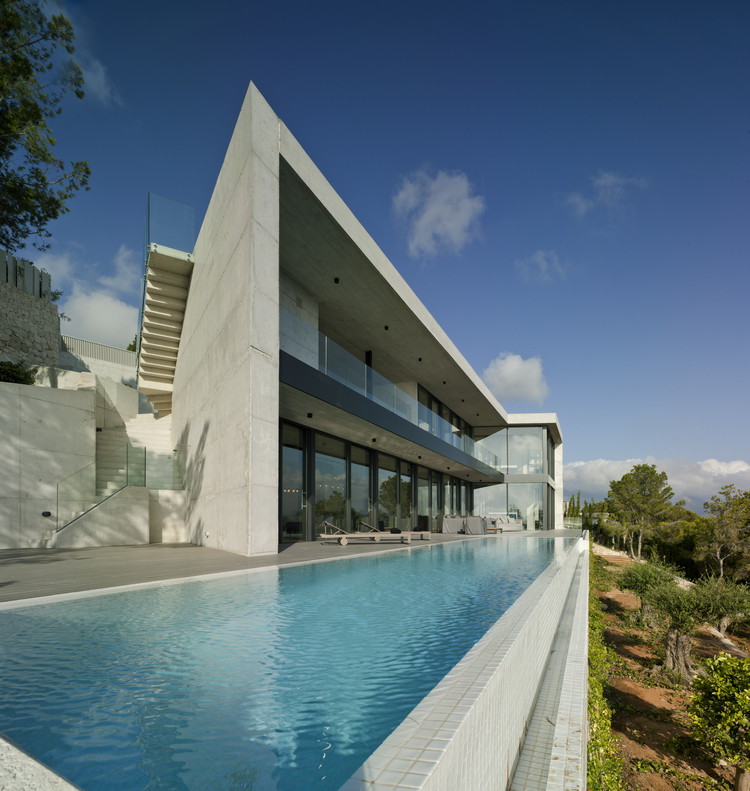 Text description provided by the architects. The idea from which the project developed, was born from a trip to the client’s country, where the need arose, in a certain way, to reproduce the architectural tradition of soviet brutalism that historically has been so present in their lives... and therefore, came Le Corbusier and his bêton brut as project leitmotiv.

After the initial ideas, we did a deep reflection between what the house should be on its own, and what it would be because of the place in which it’s framed, an impressive natural landscape facing the sea with a balcony looking over the Mediterranean. Thus, the project emerges as a juxtaposition of ideas that solve different needs. These include concepts that are foreign to one's own architecture, such as the concept of investment, period of stay in the guest area, etc. So, considering these concepts that are not very logical or easy to interweave and apparently are in contradiction with the affable character of the owners, and considering also that some of these concepts could be understood as ostentatious, empty or redundant, it was decided to act decisively and firmly by building a massive volume that clearly expresses the customer's wishes, like a punch at the table.

One of the main challenges to be solved would be to provide the house with the maximum possible privacy while not blocking the exceptional sea views of the plot. Therefore, after evaluating the variables of access, orientation, views, bioclimatic hypothesis, privacy and the strong slope of the plot, we decided a geometry whose plant would be an "L" shape, where the northeast facade is transparent, i.e. a large window that turns into a lookout to the sea, and the rest of the facades, are opaque, massive, pure concrete that ensures the necessary privacy regarding the neighborhood. In addition, thanks to cross ventilation, thermal mass, solar protections and a detailed study of shadows, an efficient home was achieved, with very low energy consumption.

In this sense, a particularity of this dwelling, is to have built it without having used a single brick... all the facades and partitions of the house have been made of exposed concrete executed in-situ, as a coherent denouement to the aforesaid bêton brut. Therefore, it was decided to be very simple and to use few materials ... only concrete, wood and steel, all of them basic but very noble materials.

The house offers a unique answer to different problems, clearly separating the more public areas from the private ones, as well as the night program from the day. The house is composed of two floors, on the ground floor is located the day program, except for the main bedroom, which is inserted in the northwest façade. However, the night program is distributed on the first floor, where the garage and the main access of the house are also located, due to the need of access to the top of the plot. In the intersection zone of the two wings you can find the hall and the vertical nucleus of communication in double height, articulating the distribution of the rooms of both plants.

The building forms a unique and resounding volume, despite the fact that the ground floor is larger, this part of the building is buried underground, so the exterior perception remains as that of a single container space.

In the exterior, native vegetation has been used and the original terraces of the plot have been restored, achieving maximum integration of the house in the natural context in which it is framed. 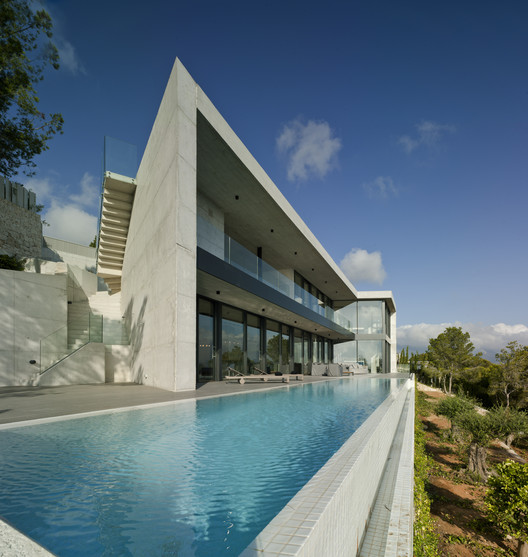