This silent film, ‘The Skyscrapers of New York’ bears rare footage of the construction of a skyscraper from over one hundred years ago, shared by the Library of Congress as part of their ‘Early Films of New York’ collection. The first scenes include real work crews and the early construction methods that made the first skyscrapers possible; the steel framework the men can be seen clinging onto was a technical innovation that provided the strength and stability for buildings to be built over twenty floors high. It is startling to imagine their lack of concern for health and safety as the men are pictured dangling off a crane line in the sky.

The melodrama adopts the dramatic portrayal and larger than life acting of a silent film, depicting the foregone culture of public fisticuffs and disparaging ethnic attitudes from over a century ago. Weaved with the actual footage from the time, it is fascinating to understand how the workers operated as they scurry around laying bricks, heating rivets in a forge and assembling the steel girders whilst the storyline of the thief ensues.

Historical landmarks can be spotted in the background of the film, including Union Square and Everett House, one of New York’s most fashionable hotels, captured just two years before it was demolished. The film reflects the complications of construction, something that contractors generally hide from us today, and the lack of awareness of the consequences and potential dangers of a construction site.

News via: Library of Congress. 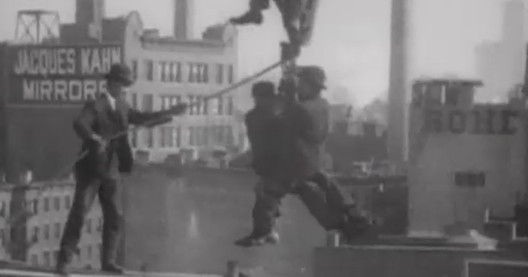