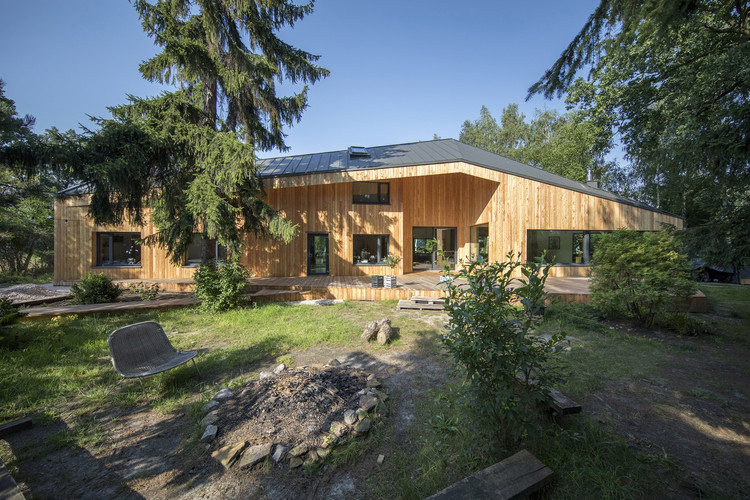 Text description provided by the architects. This house, located in Owczarnia, a village near Warsaw, to a large degree owes its form to its owners, who, wanting a personalized, unique look, agreed to a spatial composition that departed from that of the archetypal home. The result was a building they came to call "the sarcophagus," "the battleship" or "the crystal."

Its asymmetrical roof consists of four planes of differing slopes covered in graphite panels that flow down into the northern and eastern walls, creating a seamless shell. The southern and western walls were finished with wooden boards that join with the wooden surface of the terrace, together becoming one compositionally inseparable part in this interlocking form.

The home’s ultimate geometry reflects the functional considerations of its design. The ridge of the roof sweeps up from the ground floor to the upper story, making each subsequent room able to take advantage of a higher ceiling. The space thus created above the children’s rooms was used for mezzanines, that above the utility area became a storage space and additional storage room also opened up over the bathroom and closet. Walking the hall, one sees the asymmetrical gable of the roof soaring upward, braced by ever higher girders. The roof hits its peak height above the upstairs rooms. Having mounted its summit, it then rumbles rapidly downward, creating very rich interiors in terms of their structural variety. This descent halts in the far corner of the living room, where an exposed roof truss marks its lowest point. The crescendoing ceiling heights and geometrically-varied girders create interiors that take on a sense of dynamism and lack of repetition.

A crucial design consideration was to let the maximum amount of light into the living room, which was thus situated in the sunniest part of the plot. Its long horizontal window catches the noonday sun, while its high vertical windows welcome the sunset.

The ground floor contains a living room, dining room and kitchen, as well as an office and a sleeping area for the children consisting of two rooms and bathroom. The upper floor holds the master bedroom, which has a bathroom and walk-in closet.

A freestanding fireplace attached to a long stainless steel pipe was placed in house’s lowest corner, in the living room. The interiors have been left in a very raw state, with their finishings planned to make use of the same materials employed for the core construction, i.e. bricks for the walls and concrete for the floors and ceilings.