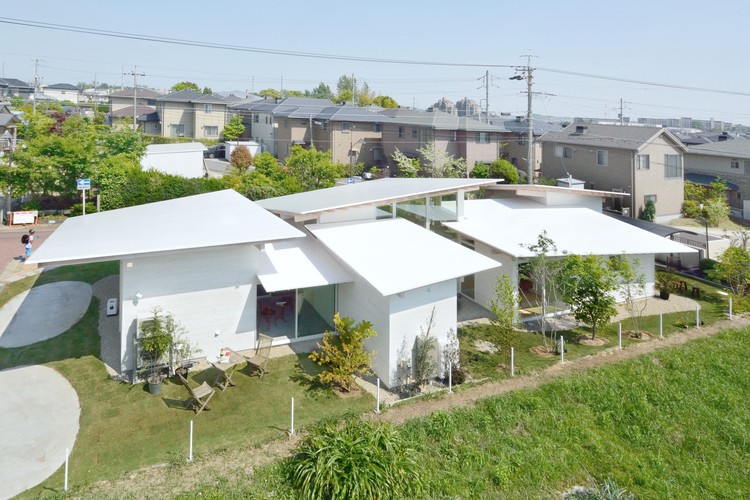 Text description provided by the architects. This is a house for a married couple and their child. Its site is located in a residential area facing the school route that school children and wives of the neighbourhood pass.

This area has gentle hills. Many sites have developed the flat ground by heaping up soil, therefore there are no connections between the natural typography of the road and the flattened sites.

Most of the nearby houses are surrounded by walls and have a parking lot at the road side along the site.

The flat site, the wall and parking lot have made the distance more than necessary between living space and the town.

I connected the landscape and the road. I built six roofs in HP shell which lie one on top of another to the landscape.

I designed each of the roofs so that eaves become high to center of the site, and low to the outside. In the center a bright open living space is created, and the outside addresses the surrounding town at a human scale.

The line which connects the lowest to the highest point of each roof creates a diagonal line. The line is a gentle valley, therefore the flow of rainwater is controlled.

I made gaps between the roofs which lie one on top of another by lifting up each corner beside the highest and lowest points on the roof.

The gaps allow the passing of wind and light, connecting the house to the elements.

The underside of the roof with its around of curved surfaces responds to the gently undulating typography of the town. As life passes between the space under the eaves a continuity is created between inside and outside.

The garden arranged alternate and gently slopes down to each adjacent street, combined make the space like a small park, creating accessibility and encouraging relationships between the house and its passing neighbours.

Both school children and wives of the neighbourhood expressed an interest in the house and often spoke to the residents during construction. A man of the neighbourhood visited on its completion, and I heard he liked the tree in this garden, so he planted one in his own. When I took a picture for some magazines, I also noticed that the opposite house’s were all painted white. 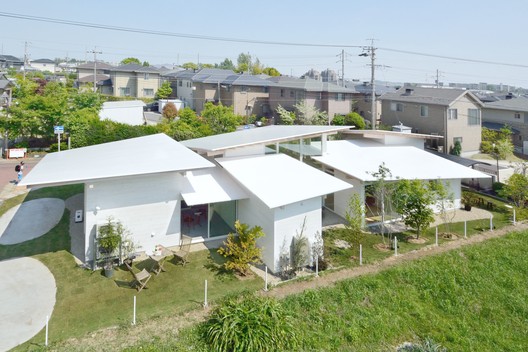