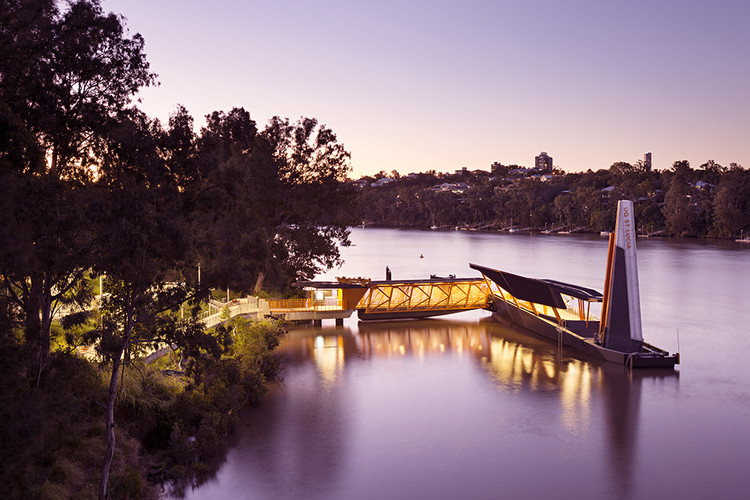 Text description provided by the architects. The Brisbane Ferry Terminals Project has won the 2017 Good Design Award and the United Kingdom’s ICE Brunel Medal of Excellence for the radical innovation of ferry infrastructure.

Cox Architecture, together with engineering firm Aurecon, completely reimagined the concept of ferry terminals after the fatal and devastating Brisbane Floods in 2011.

Massive floods hit Brisbane in 2011, with the collapsed pre-existing Ferry Terminals becoming symbolic of the catastrophe. The widespread damage cause by the floods and river terminals was a catalyst for an International design competition to find a resilient solution.

Cox Architecture in collaboration with Aurecon won the competition and developed a highly recognisable network of flood-resilient terminals that enhance the experience of river travel, contributing to Brisbane’s aspiration of creating a sustainable, accessible, new world city.

The idea involved a radical rethink of the ferry terminal archetype, reconceiving both structure and form. Rather than increasing bulk and mass to withstand natures force, Cox Architecture’s solution leverages the laws of nature itself to create the next generation of resilient infrastructure.

Three mechanisms of resilience form an integrated response. The first comprises of a single tall defensive pier, in place of multiple piers surrounding past terminals. Placed at the upstream end this is used to deflect debris and vessel impacts.

Secondly, a gangway was devised incorporating floatation tanks, so that in the event of rising flood waters it lifts off a pin, rotating out of harm’s way to allow debris to pass through. After flood waters recede it is rotated back into position.

The third strategy was to shape the architecture of the pontoon like a boat to deflect debris and provide less resistance in a flood.

Simultaneously, the terminals were designed to enhance public engagement with the river and to provide disabled access. A world first gangway system was developed comprising of a series of suspended floor platforms that respond to the tide, pivoting to achieve a compliant ramp gradient at all times.

The design establishes waiting directly on the water improving boarding efficiency and creating new floating public spaces. Having removed the forest of piles, panoramic river views can now be enjoyed under the cantilevered roof, celebrating river occupation from a new vantage point. 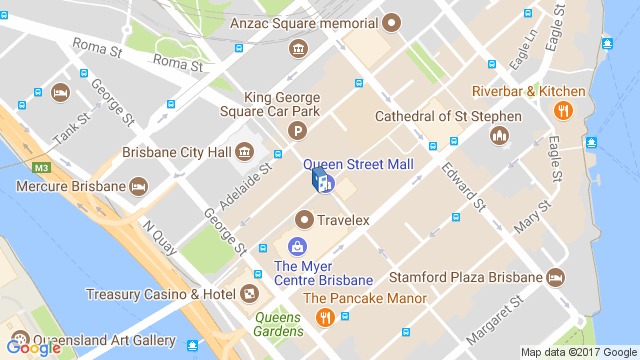 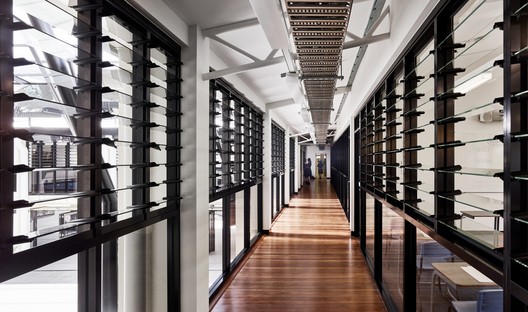 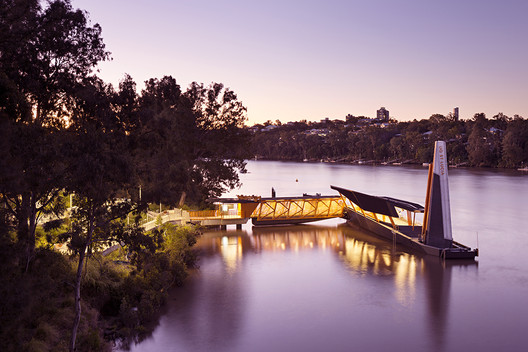