Text description provided by the architects. The project involved the insertion of a new 3-bedroom residence as a second dwelling on the lot, adjacent to an existing garage on large block in Carlton North.

The block itself was a complex site with the existing garage and studio building to one edge surrounded by lane ways, a large double-storey heritage terrace house facing the principal street front to the eastern side and the remaining land an overgrown, rambling garden that was too large to be properly maintained by the owner and lacked connection to the main house. The owner wanted a simple, flexible and sunlit home, in which she could remain living alone happily and safely well into old-age, to be inserted into the unused garden space.

The new home had to sit alongside the existing studio/garage building, allow for direct entry to the second dwelling from the lane way plus maintain access into the garage and to the studio above whilst retaining sunlight in the existing studio room, where the owner worked. A keen gardener, she also wanted to maximize connection to the outdoors and retain some of the established planting, but create a more manageable garden.

The new house also had to sit sympathetically into the varied, lane way streetscape and respond to the requirements of the heritage overlay. The project also had a very tight budget to achieve the desired areas, so we had to plan the building as efficiently as possible and keep the structure and built form very simple. Integration of materials salvaged from the existing garden area, including bricks and bluestone pavers, was also a critical concern.

We approached the design by breaking up the site and creating a '  patchwork'   of indoor and outdoor spaces, public and private zones, and small garden zones.

The ground floor pavilion of the new house is framed by a recycled red brick wall, which extends beyond the enclosure of house to embrace the garden and separates the home from the lane way, creating a private garden sanctuary.

A new public entry porch zone was created to the south of the new house which separates the new dwelling from the existing garage and studio - and the client from her workplace in the studio. The entry porch sits neatly between the old and new elements, accessed via timber batten clad gates to both the lane way and the rear garden with a translucent roof above.

The recycled brick wall that encloses the main house and garden runs along one edge of the entry porch separating the public and private areas of the site, the owner from her workplace. The new house is conceived as a simple box with maximum openings to the north, flowing onto bluestone (salvaged from the old garden) paved terraces.

All the main spaces are located along the north face of the ground floor, allowing the owner to live entirely on one floor. To protect the north facing glazing from the summer sun, a timber pergola shade structure was designed to sit just beyond the facade line and frame the openings - this extends into the garden on the western side further strengthening the connection with the garden and framing the terrace.

The simple, efficient and flexible planning of the ground floor allows for a large central kitchen, the heart of the home for the owner who enjoys cooking and entertaining, whilst allowing the main living / dining space to be arranged in a variety of ways. The main bedroom on the ground floor also opens to the north and directly accesses the garden.

A large pivot door which separates the main bedroom from the living space can be left opening, effectively joining the spaces and allowing for a full facade of continuous glazing to the north. The maximizing of the passive solar performance of the house along with inclusion of hydronic heating, PV panels, solar hot water system and reuse of materials from the site were crucial considerations.

The upper floor is designed as a distinct, dark timber box sitting atop the ground floor open pavilion element. The form is raked to the south allowing for access to sunlight into the existing studio room over the garage.

Timber sun and privacy screening shade the full height north facing windows of the upper bedrooms - framing intimate views of the garden and distant views of the neighbourhood. A roof deck is accessed from the upper floor landing, adding to the outdoor entertaining and potential gardening spaces of the new home, a final square in the '  patchwork'  . 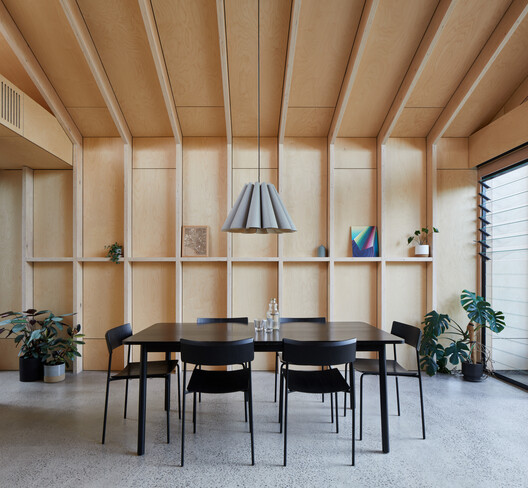 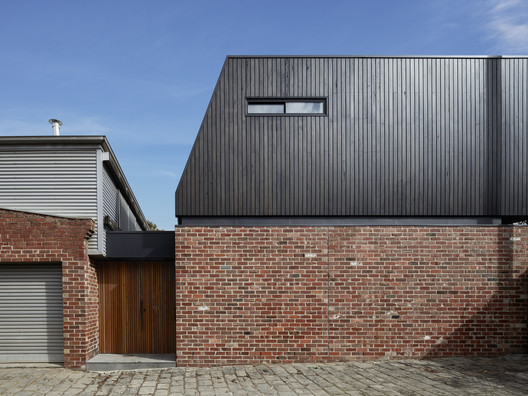