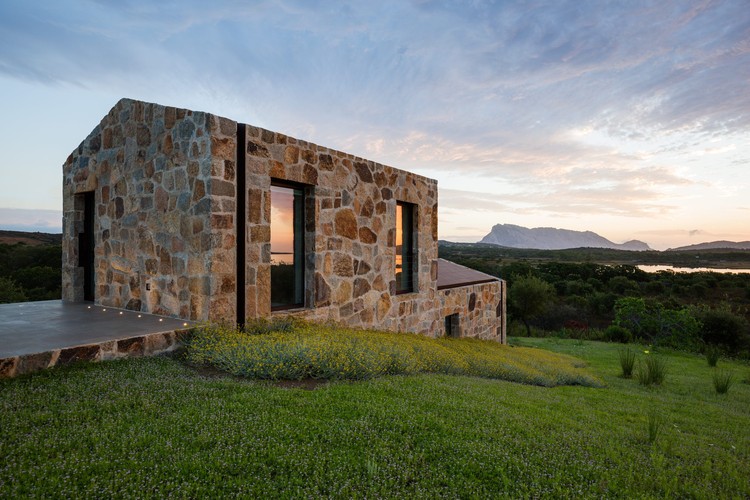 Text description provided by the architects. Designing in Sardinia means dealing with a landscape characterized by the Mediterranean shrubland, lagoons and jagged coasts, but also with an ancient tradition of elementary rural buildings: “lo stazzo”, stone house made of a linear sequence of single rooms, each open on the outside, separated by enclosed walls and with slooping roof.

This small realization, 200 meters from the sea, is a contemporary reinterpretation of that typical rural building of Gallura. Like the ancient coastal “stazzi”, in a dominant position on a hill, close to the lagoon and the beach, the project provides an elemental development of rectangular units covered by slooping roofs, positioned along the north-south axis, with few and small breachs on the long sides oriented east and west.

The partition of the house into several units and the detachment of them allows to "catch" the landscape, causing intermediate spaces: a closed patio on two sides, centered between the living and the sleeping areas, provides its part of nature and represents the heart of the outside life of the house.The simple and linear facades, made of granite in various colors, have on the two gables of the living room large backword glass walls wide open on the landscape. Compared to the “stazzo” type, which strictly closed the north and south prospects, this is the most evident breakthrough solution.

The pure and elementary view of the building is strengthened by the few materials used - corten, stone, plaster and cotto tiles on the roof - and by single recurring elements such as guttered canals. 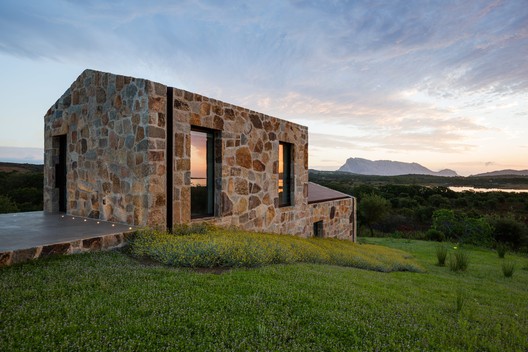