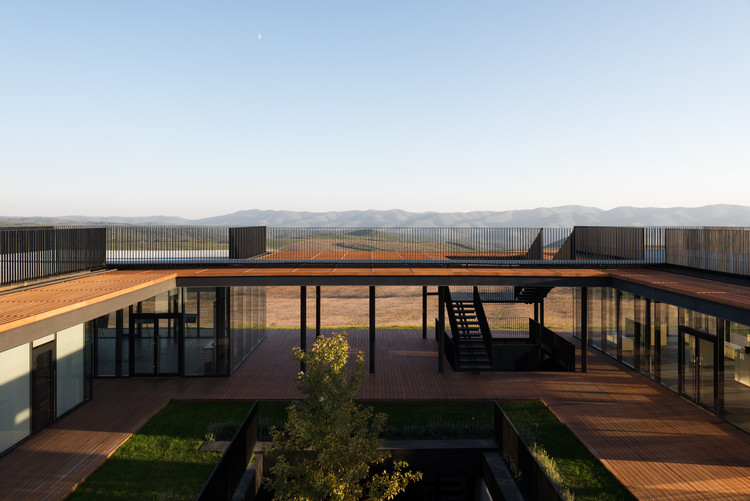 Text description provided by the architects. The Gai-Kodzor Winery (Russia, Krasnodarsky Krai) has been completed. General Designer of the building is the architecture bureau Kleinewelt Architekten. The 1,500 sq.m. multifunctional complex is located halfway between Anapa and Novorossiysk, the sunniest spot of Russia just 5 km away from the sea. Apart from being a production facility, the project is to combine museum, education, hospitality and entertainment functions. The project is truly innovative. The traditional wine producers in Spain, France, and Italy have long been using modern architecture as an attractor.

Construction of this type of buildings appealed to Frank Gehry. Norman Foster, Santiago Calatrava, Renzo Piano, Richard Rogers, Christian de Portzamparc and the current winners of the most prestigious architecture prize, Pritzker award, Spanish RCR Architects. It is to be noted that, except for some rare cases, the architecture of the “star” wineries does not tend to promote itself, striving rather highlight the surrounding scenery of wine yards and local production practices. As the construction goes on, the Winery will be supplemented by a museum, mini-hotels, and observation decks. The Kleinewelt Architekten team has decided to embrace every function typical for a public facility. “Gai-Kodzor wine is served in any neighboring restaurant, so it was necessary to come up with some idea that would attract visitors,” says Nikolai Pereslegin. “It is not just a winery, it should be a cultural center with its lecture hall, café, observation deck and, prospectively, a small hotel. Such versatile approach is unusual for Europe, to say nothing of Russia.”

At the same time, in keeping with the best European traditions, the winery is integrated into the natural environment. “Of course, one of the major tasks was to retain the magnificent relief which had been geologically formed here,” comments Georgy Trofimov, “The environment requires as much attention as the town. Sometimes even more.” Therefore, the winery provides a sort of “frame” for the surroundings: the columns and structures “fix” certain aspect views, just like a camera lens. As a result, the pavilions on the hilltop inevitably attract attention, while mildly dissolving in the air of nearly Tuscan landscape, sun-kissed and semi-transparent. This is all the more surprising if one takes into account that the authors have realized their dream to build a structure where the exposed concrete is used both as a finishing and load-bearing material. The resulting building is “green” in every sense!

Besides being in harmony with the surrounding landscape, the complex has an oasis in its center, composed of rare flora species which have provided the basis of the ornamental decorations used to create extraordinary dancing shadows in its interior. “The grapes enjoy favorable conditions in Gai-Kodzor, while there are fewer plants of another kind in the locality”, explains Nikolai. “We scanned the flowers of the site and integrated their patterns in the claddings made of corten steel. The ornamental patterns will be projected to the pavilion walls. Gai-Kodzor is the place in our country’s geography having the longest sunny season, so we decided to use dancing shadows in the interiors.”

The design of the winery complies with all current requirements of environmentally friendly and sustainable architecture: wind generators, solar batteries, and other technologies help to save electricity. The new building is a sort of “museum” of both innovative and traditional technologies. Each room is devoted to a different kind of wine. “When moving around the Winery, one can see the entire production process,” promises Sergei Pereslegin. “The building has already the processing equipment installed and it looks absolutely fantastic.” 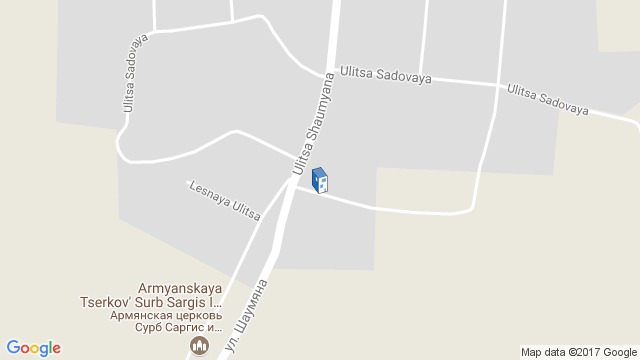 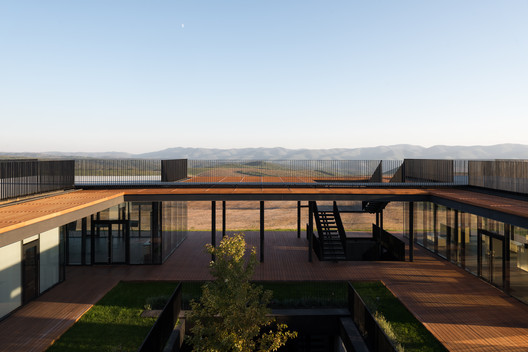