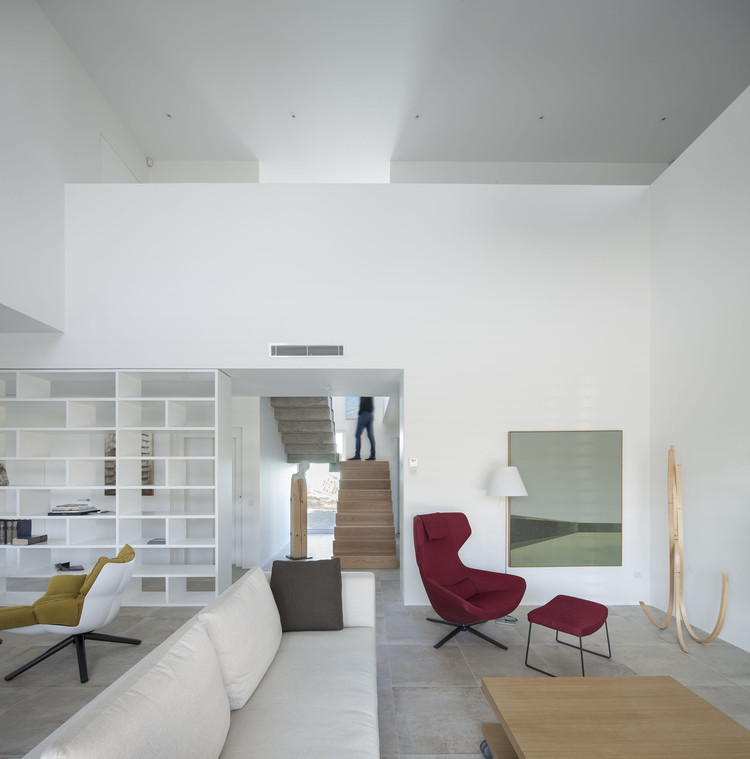 Text description provided by the architects. A box Organized around a large central space with a double height through which the eye and the light can pass.

The idea underlying the project was to optimize the use of the rooms and create a marked feeling of space. The orthogonal layout of the ground floor is achieved through the use of two large shelving units. The units organize the space, separating and joining the uses at the same time. As a result, in the east-west direction, we have the vital spaces of the home, while the north-south strip separates and divides the serving spaces from the served ones.

The north façade contains the technical area of the house, the space than provides service to the other rooms. Hence, linked to this façade, we have the horizontal and vertical circulation systems and the installations system. In the south of the home are the rooms and spaces to be enjoyed: the living room, dining room, games area and bedrooms. With this layout, it was possible to organize the space to its full potential and to connect the building´s installations in a simple and coherent way.

The corridor on the ground floor is delimited only by the shelving units; it does not have doors. On the first floor, the corridor is the nexus of the entire home, visually connecting the two floors. It features, moreover, a large window at one end so that, on glancing down the corridor, the eye is carried beyond the confines of the house.

With regard to the façade design, the openings were positioned according to the energy requirements of each façade and the spaces behind them. You can therefore see smaller openings in the north façade and large ones in the south, where most activity within the home takes place. There is a single adjustable opening in the wets façade where the kitchen is located, thus reducing the energy loss that a larger opening would have caused.