The bidding process for HQ2, Amazon's second headquarters in North America, reached a crescendo last week as the submission deadline drew close. While 238 American cities scrambled to submit proposals and run campaigns in the hope to woo Amazon—or as Slate witheringly described the process, "The Bachelor: Corporate America Edition"—the internet abounded with all sorts of discussions on the project. Does our city have what it takes to house the second headquarters? How would HQ2 affect the selected city? Why are smaller cities submitting proposals when they clearly don’t meet the criteria? Can we predict which cities are more likely to make the cut?

To pinpoint possibilities, some analysts studied biographical details of current Amazon employees, such as where they went to school; others calculated travel times from the Seattle headquarters to 40 closest participating cities. Similarly, metro analysts at Moody's Analytics used a data-driven approach to draw up a list for the top 10 cities and here’s what it looks like:

You can read a detailed reasoning behind each of the choices here; but what’s the big deal about HQ2 anyway? And how will it help the winning city?

In September, when Amazon announced its decision to expand and build a second base outside of Seattle, it also promised investments worth $5 billion (“an amount that could build a small Gotham,” in the words of CityLab writer Andre Perry), 50,000 high-paying jobs, and a campus with the potential to expand to up to 8 million square feet (750,000 square meters) by 2027. This automatically meant that the chosen city would get to see hundreds of thousands of job opportunities, both during and after HQ2’s construction, as well as ambitious development projects in the surrounding areas.

Through its previous investments in Seattle, Amazon added $38 billion to the city’s economy. Simply put, HQ2 would be a giant urban catalyst in terms of workforce development, investments in various sectors like education and technology, as well as improvements in existing amenities. It would also help attract foreign and local companies and businesses, encouraging them to invest or expand.

But what would a second Amazon city look like in terms of urban design? Presently, Amazon is the proud proponent of “sustainable, thoughtful design,” renewable energy, and a focus on walkability and connectivity in the spaces that have sprung up around the Seattle campus. Their requirements for the second headquarters suggest that they are planning more of the same, as their RFP outlines a need for mass transit access directly at the site of the new campus.

Apart from the general advantages of being the home for HQ2, there are some that are city-specific or proposal-specific. Detroit, for example, would witness a complete regeneration. Baltimore, with its economic troubles and the decline of its shipping industry, would be prevented from falling into further decline. With Ontario proposing investments in the education sector in return for HQ2, it would mean a strong, skilled workforce.

But in spite of all of this enthusiasm, there are also plenty of people ready to question American cities' feverish courting of the technology giant. A sudden influx of high-paid workers can stress a city's housing supply and transit systems, and risks gentrification and displacement. One only needs to look to Northern California to see that a high ratio of technology-sector workers does not automatically create a perfect city. And, as CityLab writer Kriston Capps mentions in his tongue-in-cheek bid for Amazon to open HQ2 in his one-bedroom DC apartment, "Hosting Amazon’s HQ2 means grappling with serious issues in housing supply and affordability, transit planning, access to education... Like most cities, I am not taking aggressive steps to address these problems. I’m completely unprepared for tens of thousands of workers moving into my apartment. I am bidding anyway."

Much has been written about the hundreds of proposals and publicity stunts—some practical, some impossible and some downright preposterous—that cities of all shapes and sizes put forward. And although the bidding is over, it is only the beginning of all speculation and commentary, since Amazon’s announcement of the winner is not expected until sometime in 2018. For now, the saga continues to provide ample opportunity to discuss what, exactly, makes a city appealing—to both corporations and people.

NewsArchitecture NewsSeattleUrbanismAmazon HQ2ProposalsAmazonia
Cite: Zoya Gul Hasan. "The Top 10 Predicted Cities for Amazon's HQ2 (And Why HQ2 Will Be a Major Urban Catalyst for the Winner)" 24 Oct 2017. ArchDaily. Accessed . <https://www.archdaily.com/882078/the-top-10-predicted-cities-for-amazons-hq2-and-why-hq2-will-be-a-major-urban-catalyst-for-the-winner> ISSN 0719-8884
Save 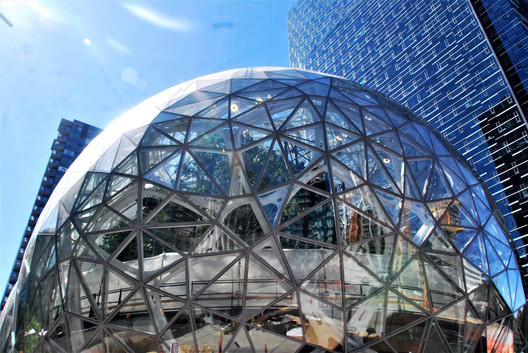