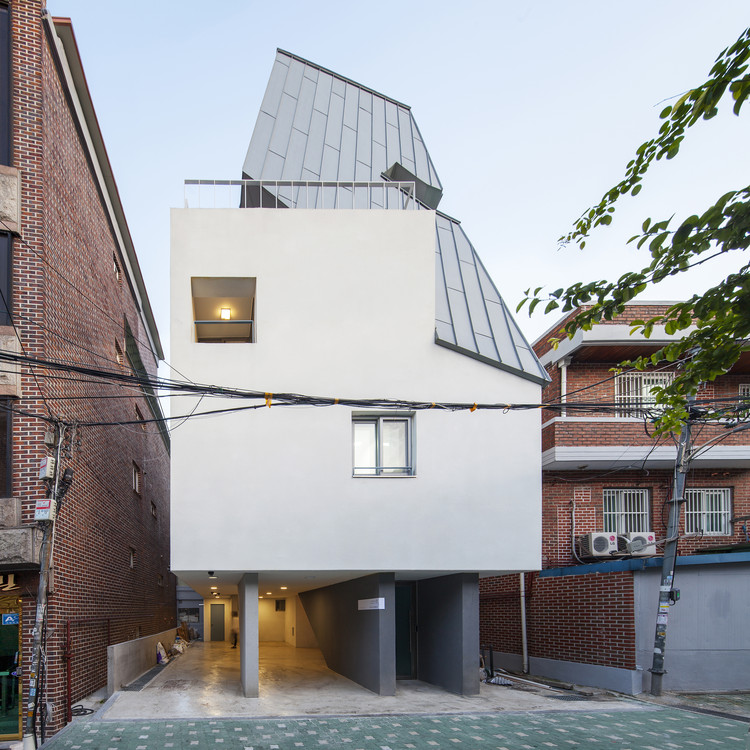 Text description provided by the architects. Sageun-dong in Seoul is a topographically isolated village. The southeast side of the village is surrounded by Cheonggyecheon stream and Hanyang University, while the north side is surrounded by the adjacent hill. The Saguendong-gil road that leads to the back gate of Hanyang University serves as the access way to the village, and yet pedestrian access to the village is difficult in many ways since the uphill path is very steep. Unlike any other neighborhoods in Seoul, the unique atmosphere of Sangeun-dong resulted from such isolated topography.

The atmosphere of Sajeong-dong is past-oriented. The unique ambiance of this village is all the more noticeable when the village is compared to the geopolitical aspects of Seoul and metropolitan areas where the commercial areas for work are completely separated from the bedroom communities for residence. Sageun-dong is reminiscent of residential areas in the 80's where neighborhood convenience facilities were alive and active.

As elaborated in the legal definition of 'neighborhood living facilities' that refers to the living convenience and wellbeing of residents, a residential area is supposed to have daily necessities available for the residents at close range. However, residents who have lost their neighborhood living facilities are now enjoying a strange consumption pattern of going to discount superstores and managing the distribution and storage of their daily necessities on their own. Since there is nothing much to do in the neighborhood, the villages in Seoul are quiet day and night (especially ever since children started to attend several private academies after school hours).

However, in the case of Sageun-dong, which has gone through geopolitical isolation and the circumstances of the days have made its residents take care of all living-related consumptions in the neighborhood, the village, just like the villages in the eighties, is busy during the day and becomes quiet only when everyone goes inside to go to bed. Another reason for the unique bustling ambiance of this village can be found in its population distribution, which is mixed with the students of Hanyang University living apart from their families and the residents who have lived in the same neighborhood for several decades. In other words, this village is inhabited by a mixture of adults and youths, or settlers and nomads.

The reason development activities in his kind of old neighborhood clashes with preservation is because they presuppose merging of lots. Small plots of land do not guarantee sufficient development profit and are rarely developed independently because reusing existing buildings is financially advantageous in most cases. As always, people find solutions for problems: they combine the lots to pursue maximum profit within legal limits. The merging of lots changes the urban structure; takes away the alleys; makes the neighbors move; and destroys families and the society. However, when confronted with this very natural capitalist activity, a romantic outcry for the preservation of urban structure is easily defeated. And it is unclear whether this defeat is bad.

The client's requirements were simple; to ensure maximum floor area ratio within the 139㎡ lot, and make the building functional and convenient. The building is composed of one owner unit for the client's household, and eight rental units for Hanyang University students. To this basic concept, we proposed and added a few items such as an elevator facility as winning elements in the competition with surrounding rental housings.

We were able to find our own way of solutions for the dilemma of Sageun-dong between development and preservation by securing the highest number of units at 200% FAR, providing neighborhood living facilities, securing attics, installing balconies, and squeezing in an elevator facility. If architectural practices, that were only possible in larger scale projects from merging of lots, can be realized in smaller scale projects, clients will not insist on taking the annoying course of expanding their projects. They can seek profit and preserve the urban structure. Thus, the work can be sufficiently capitalistic and romantic at the same time. We can certainly make developments while preserving our neighborhoods.

The building also responds to the demands of the contemporary residential environment. The strongest trend dominating the current residential culture is the spatial integration that underwent rapidly mainly in housings for a single household. This trend is prominent also in Sageun-dong, which serves as a dormitory for Hanyang University. The housing type called 'one-room,' where the living room, the bedroom, and the kitchen are all placed in one space, is now getting to the point of combining the kitchen with the bathroom relying solely on their common feature of water being used there. (The rationale seems to be that eating and excreting in the same space is as efficient as eating and sleeping in the same space.)

Here, we found the reason why the living environment today is so vulgar. For people to live in, a space needs to be properly partitioned. Apartments turn into chicken factory farms as balcony spaces are recklessly taken over by extended living area. This type of one-room office spaces gave birth to the circumstances of people being forced to live in a 'gosiwon' that doesn't even has a window if they are poor. Different kind of spaces, however small, need to be present in a house; spaces such as a balcony, multipurpose room, bathtub, a living room loosely separated from the kitchen, built-in cabinets or closet that fit the space, etc.

Even though we took into consideration various aspects of the building, it was inevitable that the absolute size of the building would be small. In order to secure the maximum number of units, small units about the same size had to be replicated. Windows were fabricated to add personality to each unit. The windows in two units with identical floor plan but on different floors were positioned differently. The smaller the room, the greater the impact of change. With this arrangement, we hope the residents will at least be able to declare their respective taste. A wistful situation might occur where a person is upset because the room that suits his/her taste has been leased already. We feel sad that even such a wistful situation is missing in the residential environment of young people nowadays.

We traced the maximum volume along the slant line for solar access and the shape of the land and ultimately found a diamond-shape slanted mass. Lifting up the mass (like a skirt) and placing in an opening that leads to the veranda on the 4th floor, we realized that it was appropriate for the owner's unit to be on the 4th floor rather than on the top 5th floor. Our client was concerned about possible interferences from the tenant households on the 5th floor, but we persuaded her to think about the usefulness of the veranda on the 4th floor and the marketability of the two units on the 5th floor respectively equipped with an attic. When the slant line for north-side solar access is applied to a building, the staircase is usually placed at the southern corner, where the slope is least likely to interfere the staircase. This means that the staircase would be placed on the sunniest side of the building.

We rejected this planning approach used without a doubt in the home business market and instead moved the staircase northward as far as possible allowing for the height of the last floor. As a result, we were able to secure units with southern exposure evenly throughout all floors in the building. The configuration of the staircase itself was also the outcome of studying the limits set by the building code. The somewhat complex staircase, which combines straight stairs with an effective width of 1.2m and winding stairs with an effective width of 0.9m, minimized the area of common use space and increased the area of exclusive use for each unit. The small neighborhood living facility we were able to secure on the 1st floor owes its existence entirely to our devoted study of the location and configuration of the staircase.

The two slopes along the slant lines for solar access meet at one corner at respective angles. In order to minimize the contamination of the slopes, we decided to use zinc standing seam finishing for the slopes and worked with the joints based on the corner where the two slopes meet. In this way, we were able to finish the corner with the standing seam alone without using additional flashing. As shown in the elevation, the finishing resultingly accentuated the slanted mass. The design process of this building is not an "invention" but is a kind of "discovery" in that its most significant design element was automatically calculated based on the Building Act prescribing slant line for solar access. Our task was to reveal the virtuality that is spread around the site through the language of architecture, and what was needed here was archaeological diligence rather than inspiration.

The finishing material used for the slopes was a product called Azengar from VMZinc. It is a matte light grey product. It is not our way to finish a strong formative change with a strong material change. The finishing for the slopes was chosen among natural materials that would clash the least with the white stucco finish on the vertical face of the building. Due to cost problems, we were unsure until the last moment whether we could proceed with our plan. Fortunately, thanks to the determination of our client who trusted the initial design more than the architect himself, we were able to realize the design. As the building looked like a 3-year-old building when it was just completed, we hope that it will look like a 3-year-old building even after 30 years.

This project asks the question whether local values and individual urge for development are compatible. Our answer to this question was that realizing the maximum asset value in a small plot of land is actually helpful for the preservation of local values. As a matter of fact, no one will destroy their own neighborhood if profit can be attained. At the same time, this project was our answer to promoting an alternative to the existing housing styles for young people today by pursuing diversity of space.

Diversity, however, was realized indirectly. It was realized through the shape and position of the windows, the variation of minimized balconies, and the delicate arrangement of built-in cabinets according to each unit space. This was also the outcome of considering first the interests of the client. Spatial diversity is not something worth pursuing at the expense of decisively compromising profits. We believe that the preservation of local community and the creation of healthy living environment ultimately lead to the overall benefit of our community, but the architectural practice today seems to be far behind from what we believe. 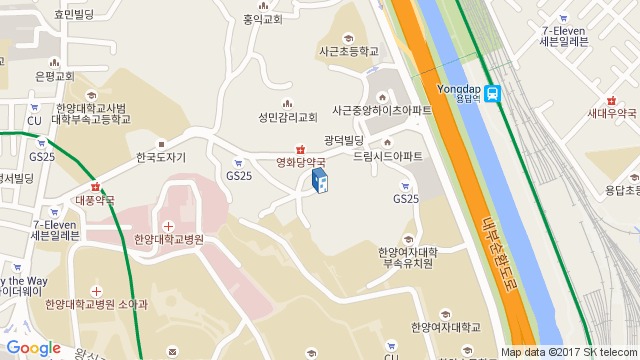 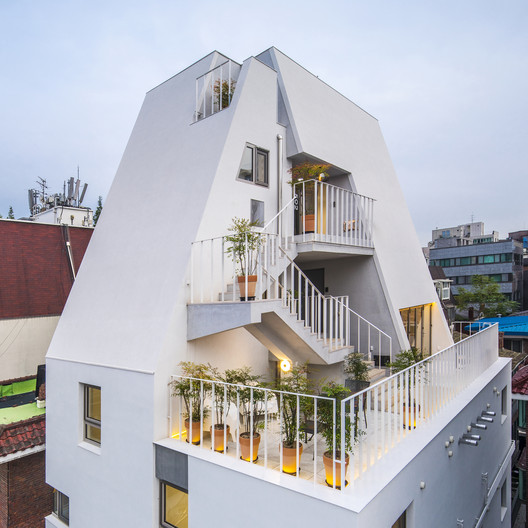