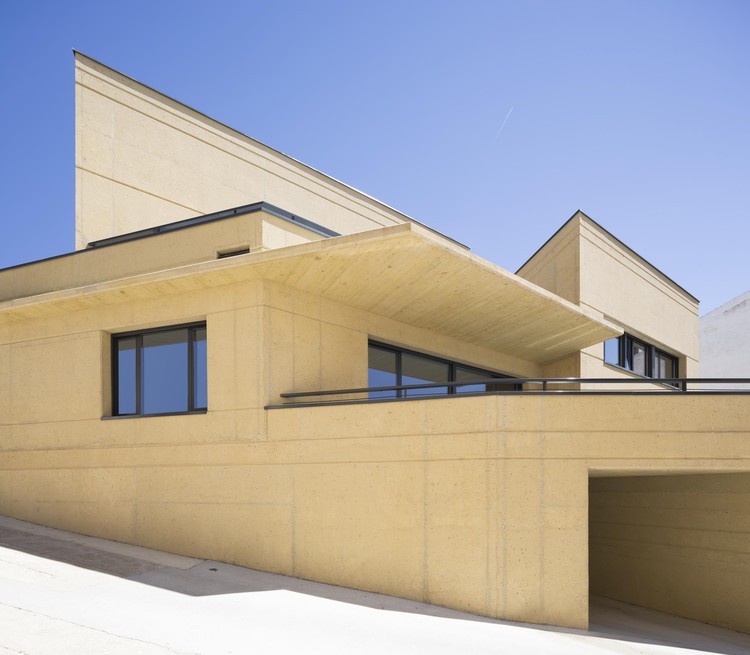 Text description provided by the architects. Lerin is a locality of Earth Estella, of approximately 2000 inhabitants, very tied to his orography. Lerín's urban tracing is of medieval origin, the Major street crosses the village for your part more discharge, the streets, ascending, they cut her perpendicularly. The people rise up to approximately 100 meters of height on the riverbed of the Ega. Both new housings are determined by the complex local geometry, for two different.

They raise the House M and the House P, as elements másicos of a material only one: the concrete I dress treated, integrated the strong earring, talking with the typical local constructions, of massive walls of load, enclosed earthy walls of adobe, typical of called " Lerin's Rock ". There have been given priority that to be and the kitchen of the housings, have ideal orientation, in the southern part.

Both housings have zone by day and zone by night independent. Every housing possesses two differentiated accesses, For the Strong street Isabel II, one arranges the principal pedestrian access of the housing, for the street “Corral de la Dula”, pasture arranges the access rolled to the garage and spaces of alleviation of semi-basement. The program contemplates diaphanous spaces in the zone by day of being kitchen and zones of access. 3 bedrooms and 3 bathrooms appear. Spaces of entertainment appear, opposite to the sunny fronts overturned to the sights of Lerin's pine grove and the suitable orientation.

The construction has been determined by limits of budget, predefined from the first moment. The housings contemplate aspects of energy efficiency, with a good energetic qualification. A constructive system has been chosen, by means of walls of a load of seen, pigmented reinforced concrete in mass and agreement to the sandblast, to make seeing the arid one of rolled singing. The panels of photovoltaic power join adequately the roof.

The generated texture has a double exterior expression that allows playing with the contrast of sufficiently experienced materials and of good maintenance, reinterpretING the constructive traditional system of "earthy" walls. The chased aims have been the integration in the locality, the optimization of the economic resources and the simplicity of execution.