Save
Mausam - House of the Seasons / ZERO STUDIO 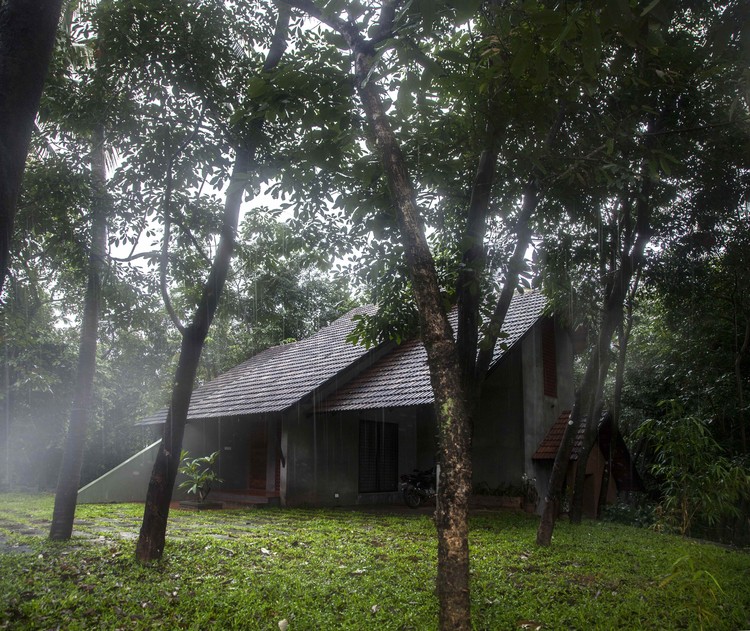 More than being low budget, this house is the outcome of a realization that architecture need not be expensive and brand new. In the wake of globalization, when ideas and information are just a click away and are followed by a larger audience falling to different layers of the society, the image of what is good architecture has been stereotyped to a major extent. In developing countries like India, this is rooted in a notion that there is a certain kind of architecture that represents the financial status of the user especially in the case of residences where mostly everyone wants a home that ‘looks’ rich and expensive. Like elsewhere, this has caused residential architecture in Kerala too, to slowly drift away from using the vernacular materials, techniques and thus compromising aspects such as climatic responsiveness, energy efficiency in the due course. The kind of architecture prevailing in the Middle East and Europe where a good majority of Keralites work has also become an influence in defining their taste. Whatever be the style used, the affluent class has the privilege to afford air conditioned, automated systems in their residences, but the rest who lives in the cheaper ,at times smaller scale replicas of those huge mansions don’t. They complain that there is a lack of comfort inside their homes; it’s too hot inside them while they have spent a lion’s share of their savings for them and thus are forced to stay unhappy in their dream-come- true homes.

The attempt was to create awareness on the importance of having true- to-self buildings rather than look alike ones. Not that there should be distinction in architecture  for the rich and the poor, the point here is that, whatever be the social status, residential  architecture shall speak the language of simplicity and shall respond to the aspects of the given context of site, climate, vernacular building materials and the end user.

Here, the house is subtly placed in a setting where it is surrounded by the kinds of residences which fall to the stereotypes mentioned earlier, over a sloping landscape in a rubber plantation. As part of the deliberate effort to create a dialogue between the building and its passerby’s, the house has been placed closer to the road despite the site being large enough to offer ample frontage. Though rural in setting, considerable traffic passes through the road in the front which connects several adjoining villages offering significant amount of visibility for the building. But the interesting part here was to decide on how to make use of this visibility along with the other primary concerns. To go with a modest, simple looking home amidst an array of the so called ‘expensive looking’ mansions was a crucial point in the whole process and the rest just followed; without compromising the requirements of the client, but not really  an indication of his financial status

All that the client, a retired army officer wanted was a simple and peaceful home for his family comprising of his wife and four daughters in his ancestral land. At the same time it had to be house for two: he and his wife alone, and a house for whole of the family, for his daughters are settled at far off places and they come home occasionally.

Placed along the contour, the spaces inside the house are placed in three levels connected by a stair which at the same time the vertical circulation element and also offers access points to all the three levels. The spaces are designed keeping in mind the dynamic requirements. Hence, the common spaces are expandable and the rest is kept optimum. Functional elements are actively contributing to the aesthetics of the house, for instance replacing windows with brick jalis.

The choice of material has been from vernacular options: laterite bricks for the walls, terracotta tiles for roofing and flooring, natural timber etc. and has been brought into the design using local workmanship. Plastering of the laterite walls was affordable compared to leaving it exposed since it involved technical expertise which was rather very expensive.

The interior of the residence is kept minimal, with the structural elements which were left bare purposefully, keeps it true to its own self. Furniture from the client’s old home has been remodeled and used. Also the roofing tiles were brought from a demolished house nearby.

The clay roofing at varying heights keeps the heat gain (though very less compared to concrete) away from affecting the interiors. Along with the roof, the terracotta flooring, ample air movement ensured through the jalis also adds to the thermal comfort of the house. The jalis also help generate a play of natural light in the interiors at various times of the day.

The optimization of design, methodology and material selection without compromising the aesthetic appeal as well as the requirements of the client, was the key factor in breaking the notion that all that is affordable is unattractive. This rather was an attempt to prove that affordability is a style of design to smartly bring the best out of it.

The House and the Seasons

The choice of landscape elements were derived from the site and its natural setting itself, comprising locally grown plants and trees and the existing rubber plantation in the backdrop. The house being merged to the landscape and placed along the contour blends with it. Thus, with the change in seasons the visual imagery of the house and its setting changes.

The house will look dry from outside during the summer; but inside, it keeps things cool; indicating the wishful wait for the seasons to come. It celebrates the rain in monsoon, blooms with the spring and romances with the morning breezes of the winter.