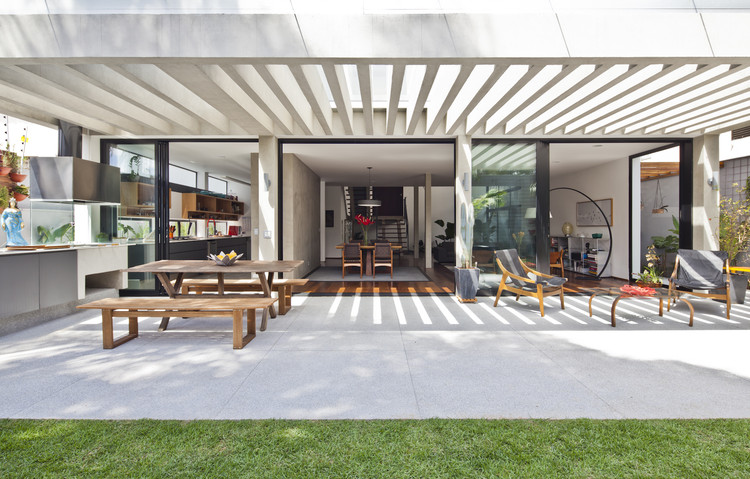 Text description provided by the architects. The renovation of a townhouse in São Paulo, deteriorated after 40 years of use, led the office to rethink the original design of the 1970s. With compartmentalized pavements, poor clarity and impaired circulation, the project had as its architect the rethinking of the social and integrate the spaces of the house inhabited by a young couple.

In order to make the necessary changes possible, the architects had to overcome some obstacles, such as the excess walls that divided the spaces; a backyard building that occupied 100 square meters of backyard grounds, and on the ground floor a two-step gap made the challenge even greater.

In order to organize the program, the architects proposed the elimination of the annex and the removal of partitions in the lower part of the house, and then the leveling of the floor of the social area. According to Mariana Andersen, this made it possible to integrate the rooms and enlarge the gardens - including the internal one, which made the balcony become the main living environment, responsible for the transition between living room, kitchen and backyard. Upstairs is the intimate area.

A glass frame was installed in the living room, extending the sliding door, to increase the perception of lateral recoil and lighting, which allowed the internal garden to be extended and repaginated.

The renovation also made it possible for the rooms to communicate, surrounded by a curtain of sunlight and plants and under an even more special factor: it made the rooms on the west face gain a privileged position for sunset.

From the street, anyone who sees the house does not imagine that it is a townhouse - the pivotal main door gives access to the intermediary level of the residence. On the right side, the office has separate entrance.

The request for a kitchen partially joined to the social area was attended with the concrete leaked partition and joinery. Before dark and closed, the environment had the wall in front of the porch replaced by sliding doors - and the connection inside-outside gained a reinforcement.

Something similar happened in the office, where the slab rests on the side walls, releasing the stretch from the ceiling to the glass closure. The pergola of reinforced concrete has four main beams that support the pillars of the facade and extend to the beginning of the internal garden, making the great balance possible.