Save
Burnham Prize 2017 Winners Announced for 'Under the Dome' Competition
Presented by:

The Burnham Prize 2017 is a competition hosted by the Chicago Architectural Club (CAC), this year the title was ‘Under the Dome,' requiring participants to rethinking the radial form that has been a part of architecture for centuries.

Participants were asked to develop a speculative proposal for the abandoned St Stephen’s Church on its centennial anniversary, challenged with the task of injecting energy and life back into the desolated ruin. In reaction to the Chicago Architecture Biennale, the historical and typological construct of the dome was to be taken and reconsidered as a contemporary structure with an understanding of the historical context.

Domes have always been an experiential space, a single volume that creates grandeur and sentiment. Both Buckminster Fuller and Niemeyer sparked interest from their domes, taking what is usually associated with a sacred space and exposing it as a bold, modern infrastructure. The entrants took on a similar task, bringing the dome into the 21st century.

The winning design breaks into the ground plane to install a public pool under the dome – creating a radiant space for people to swim underneath. This new environment of recreation in the abandoned church is a spectacle, an original idea to infuse tranquillity back into a place of worship.

Inverting and duplicating the dome of St Stephen’s church creates a bowl that invites communication inwards. The place of assembly will encourage negotiation and understanding in the social space. 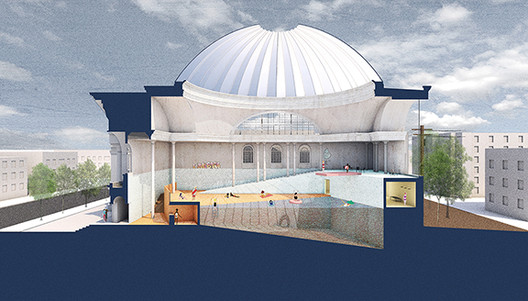