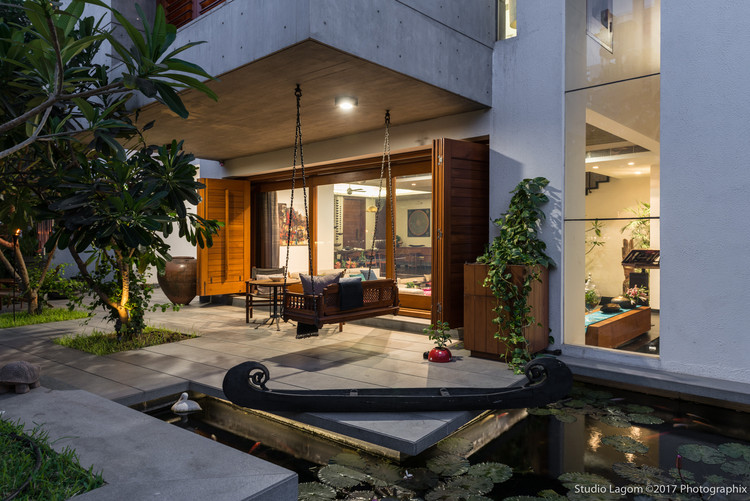 Text description provided by the architects. Simple aesthetics, a minimal material palette and connections to nature are the main drivers of the design of the Skewed House, the architect’s debut through his firm Studio Lagom. The standalone 11,000-square-foot villa seeks to create an oasis of serenity in Surat’s typical urban milieu through a programme that departs from the typical planning of this typology.

The architect reversed the ‘structure on the streetside and garden to the rear’ scheme, by setting the bungalow back, beyond an elevated garden. Rather than a forbidding, fortress-like compound wall, an interesting elevation involving Valsadi teak battens, softened by cascades of creepers, intrigue the passers-by. Beyond this, is a ramp -- which takes you directly to the garden -- sandwiched between this slatted outer boundary wall and the retaining wall of the home with an intermediary concrete wall.

The idea was to create a journey of sorts, a constricted perambulatory approach that finally ‘releases’ the visitor into the garden. The other access point, which is the ‘normal’ main door, also uses the same strategy of constriction and liberation, via a small entrance lobby that shields the main living space from direct view. The spatial programme of the villa and the zoning of the plot were also dictated by the sudden floods that the city sometimes experiences. The ground level is devoted to ancillary spaces connected to relaxation and unwinding. Atop this lies the sprawl of the living-dining, kitchen, a bedroom and the garden in the front, followed by more bedrooms, up another level.

The Skewed House does away with excess in form and materiality. Elevationally speaking, the façade projects and recedes strategically, with important areas such as the master bedroom being emphasized through cantilevering and material play. Though concrete was the material of choice, white plaster, stone and wood have been used to temper its formidable, institutional demeanor. The architect’s deep interest in photography helped him visualize this project as a series of interconnected vistas, and was also responsible for the ‘skewedness’ of Skewed House. Manifested subtly as elements shifted slightly off the straight line, this was an exercise in creating vistas and perspectives and adding more life to a three-dimensional object.

The client’s request for connections from top to bottom, skylights, a distinct identity for the worship area, nature, and a play of light and shadow inform the spatial layout. The split-level living-dining area is extensive, with a living part being sunken and the dining elevated. Close to the entrance is the double-height pooja-tower, heralded by a water-spout and set within a waterbody. Opposite the living area is a sunken courtyard with more seating. These pockets of seating, with various configurations, allow people more freedom to use the space as per their choice. An enormous Kalamkari-inspired artwork in subtle grey graces the staircase wall and is one of the design highlights of this space.

The houses established strong connections to nature with the help of suitable fenestration. For instance, the L-shaped glass inset behind the pooja tower invites the surrounding greenery in and connects the interior waterbody with the external lotus pond visually. Similarly, the nine-foot cantilever of the master bedroom is outlined in the glass, to invite slivers of sunlight and the sky into space. Also, the views from the louvered doors and windows on this level are carpeted with the blossoms and the dense shining foliage of the frangipanis in the garden.

Much of the relaxed ambiance of the Skewed House can be attributed to its substantial greenscape, developed Roots Designs. The lawn has a sectional profile (a kund-like sunken central portion) and has been inspired by the ghats of Varanasi and Ujjain. An artistic dimension was added by extending the floor pattern of the gazebo into the kund. For the architect, this house represents the firming up of several convictions: that each building is unique by way of its users, setting, function, and more; that you will deliver quality if you care enough; that there is no substitute for nature; and that architecture can leverage the innate beauty of every material, by creating the right balance between less and more. 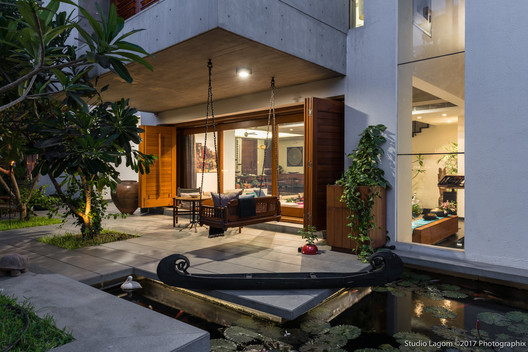