The Studio Libeskind-designed Canadian National Holocaust Monument has opened to the public in Ottawa, honoring “the millions of innocent men, women and children who were murdered under the Nazi regime and recognize those survivors who were able to eventually make Canada their home.”

Located on a .79 acre site across from the Canadian War museum, the cast-in-place concrete monument evokes the form of the 6-pointed star of David, deconstructed to create an “experiential environment” laced with symbolism throughout. 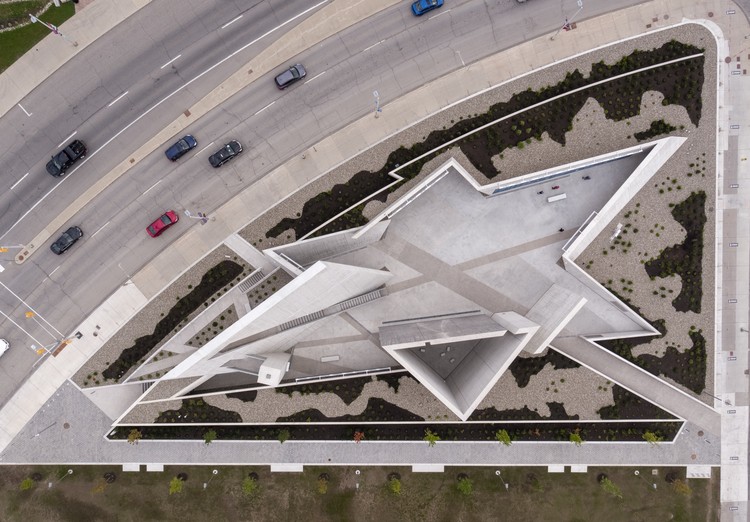 “The star remains the visual symbol of the Holocaust – a symbol that millions of Jews were forced to wear by the Nazi’s to identify them as Jews, exclude them from humanity and mark them for extermination,” explain the architects. “The triangular spaces are representative of the badges the Nazi’s and their collaborators used to label homosexuals, Roma-Sinti, Jehovah’s Witnesses and political and religious prisoners for murder.”

Two ground planes establish symbolic and circulatory paths through the structure: an ascending plane that “points to the future”; and a descending plane leading to the contemplative interior spaces. Specific program pieces are located within the six concrete triangles, including an educational interpretation space describing the history of Canada and the Holocaust, three individual spaces for contemplation, a central gathering space, and the cathedral-like “Sky Void” containing the eternally-burning Flame of Remembrance.

Murals by Edward Burtynsky feature on the walls of each triangular space, transporting visitors to the haunting landscapes of Holocaust sites. Gesturing toward the nearby Parliament Buildings, the “Stair of Hope” takes visitors from the central gathering space to the upper plaza. Surrounding the monument, a rocky landscape dotted with coniferous trees will evolve as the structure ages, representing the passing of time and the contribution of Canadian survivors to the culture and society of modern-day Canada.

“It is extremely meaningful to have been able to design and realize this monument with an incredible team,” said architect Daniel Libeskind.

“This monument not only creates a very important public space for the remembrance of those who were murdered in the Holocaust, but it also serves as a constant reminder that today’s world is threatened by anti-Semitism, racism and bigotry. Canada has upheld the fundamental democratic values of people regardless of race, class or creed, and this national monument is the expression of those principles and of the future.”

Studio Libeskind was selected to design the project in an international competition between top architecture firms. See the 6 shortlisted designs, here.

Daniel Libeskind's " elongated Star of David" has been announced today, the architect's 67th birthday, as the winner of an international design competition for Canada's National Holocaust Monument. Selected from a shortlist of six, the winning "Landscape of Loss, Memory and Survival" monument is expected to be constructed in the Canadian capital of Ottawa on the corner of Wellington and Booth Streets sometime next year. 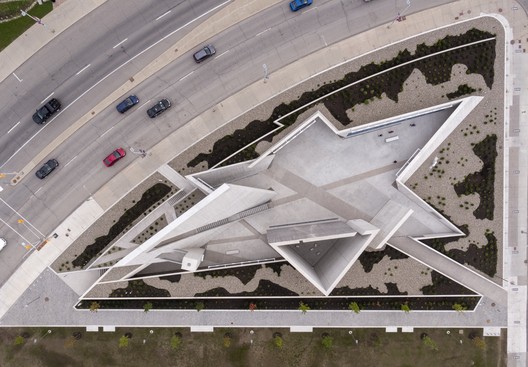