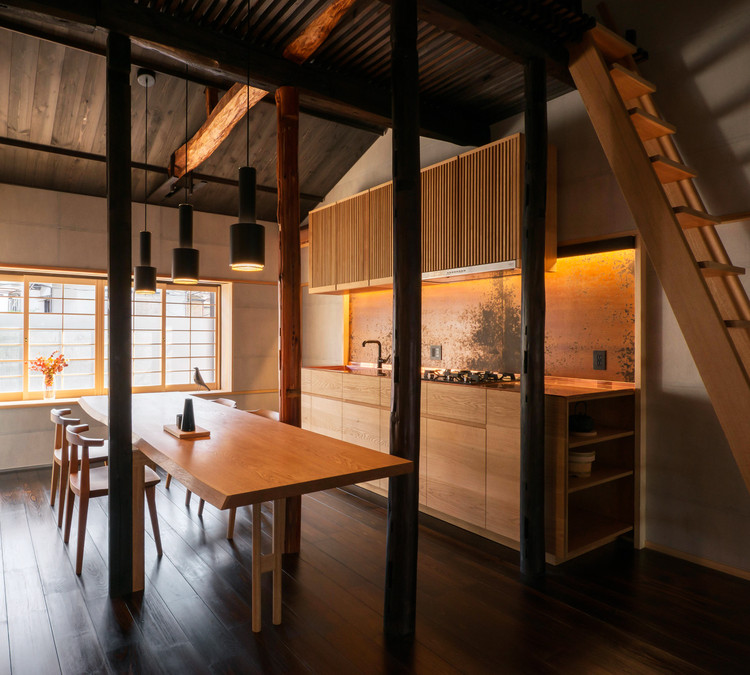 Text description provided by the architects. A deliberate balance between modernity and tradition creates this unique and textured retreat in the suburbs of Kyoto.

Osaka based design studio, atelier Luke, collaborated closely with craftspeople in Kyoto, Osaka and Nagano to apply traditional finishes and techniques to the design and renovation of this post- war terraced house. The client, a Danish-Australian furniture maker, wished to modernize the home without abandoning the character that makes traditional Japanese houses unique. From this position of respect, a design approach was adopted whereby modern attitudes to living would be balanced and contrasted with tradition.

Originally constructed in 1961 as one in a block of four homes, this typical exemplar of the post- war Japanese row house typology had been left largely unaltered and allowed to dilapidate for over half a century. The project brief called for extensive renovation of the existing home and a small extension at the rear to accommodate new indoor plumbing and increased flexibility of use.

Unlike many similar renovations in Japan, which erase historical building stock through the unremarkable application of low durability prefabricated systems, an unconventional application of traditional techniques and materials has allowed for the retention and enhancement of much of the home’s traditional character. From the stained wallpaper, to the lacquered floorboards, to the timber joinery, every element has been hand finished using traditional techniques.

Existing structural timber elements have also been alternately concealed and revealed to experiment with and occasionally subvert traditional Japanese approaches to building character. In some cases, such as with the large cambered roof beams, previously hidden elements are celebrated as striking sculptural forms within the home.

Programmatically, the house has been inverted from its original design; with living spaces placed on the upper floor and private areas on the ground. A sensitively flexible and multileveled living, dining and kitchen space transforms the spatial and experiential qualities of the interior. New prospect to the outdoors and an increased sense of spaciousness are provided by a screened courtyard, which flows from the living space through layers of sliding timber doors and paper screens.

The old ground floor kitchen has been converted into a traditional Japanese bedroom; with tatami matts, shoji screens and handmade wallpaper. A new bathroom and toilet on the ground floor replace outbuildings that were demolished to allow for extension of the house. In these private and contained spaces, lacquered wallpapers bring a vibrancy of colour in contrast the warm neutrality of the living areas.

A series of bespoke furniture pieces have also been created. Japanese oak kitchen cabinetry is combined with a unique copper worktop and services ducting, resulting in a sensitively utilitarian aesthetic that complements the raw materiality of the home. A fixed oak dining table is supported from the building structure, allowing it to almost float in space. Finally, a timber ladder provides both access to a small loft as well as an invitation to touch and grasp these specially crafted elements. 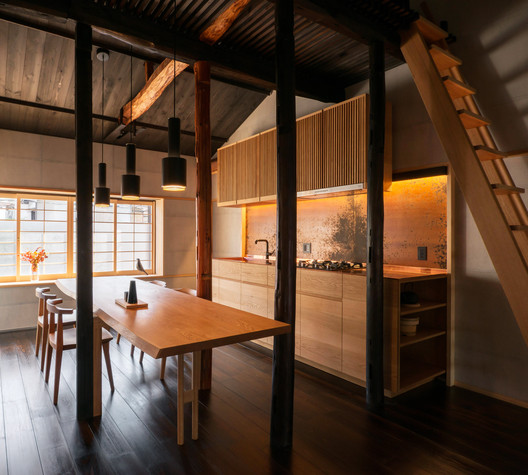