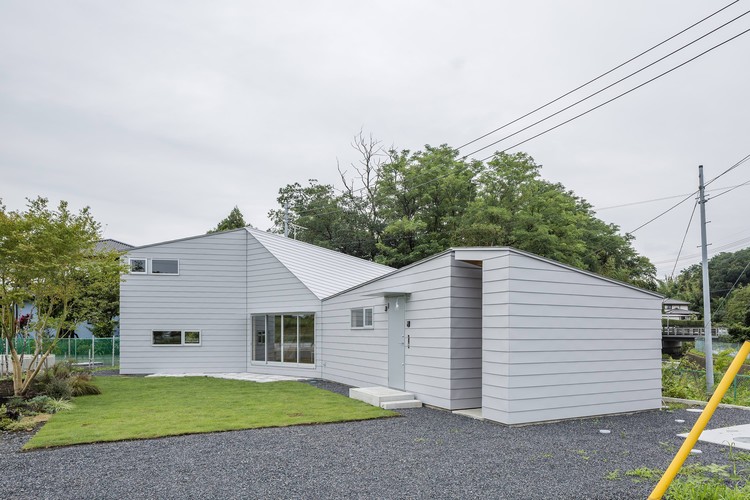 Text description provided by the architects. This project of a two-story residential building in the suburbs of Maebashi City began with the selection of the site.

There are some thin rivers flowing in Aonashi town which is the foot of Mt. Haruna. Residential groups are scattered along the rivers, and there is a landscape where rivers slip through between the fields and houses.Currently, farmland is spreading, but it was expected to gradually become residential area.

The place chosen as the site is the place where the two rivers merge. Various kinds of wild grasses are growing naturally at the confluence point, and there was richness that can not be hoped in urban areas. From the client, the life was not separated from the land, and the living based on the land was requested.

We arranged a life to follow the flow of the river and thought of a residence to live with the surrounding environment. Housing consists of an elongated volume with three angles along the river flow. The roof has ridgelines connecting the vertices of each volume so that it adjusts the scale of the whole, and it also responds to the flow of the nearby river, the trees of Nakasu, and the mountains in the distance.

As a result, a garden was created which is protected from the sun and the north wind outside but is not separated from the environment around the site.The interior was planned with a entrance, a kitchen and a living room in a row, and the wall dividing the room was minimal. These areas are loosely segmented by roof surfaces with different angles.Furthermore, because of the coexistence of two types of finished roof surfaces for each volume, let the location feel the area crossing the volume and function depending on where.

We aimed for a living environment that client could live with the land for a long time, in the scenery where the rich country scenery with unevenness in the suburbs will be leveled out as it is diverted to residential areas, while keeping the topographical surrounding environment such as still remaining rivers and Nakasu as clues to daily life.

What the wooden beams of ceiling intended. /OUVI (Shin Yokoo + Kakeru Tsuruta) It is a bent building with a short side width of 3.64m and a long side depth of 20m. Normally, a wooden structure with such a a long, slender plan needs some bearing walls in the short side direction and it's exposed to the interior. Our idea, horizontal diaphragm stiffness unified with a wooden beam 105 × 390 was formed in the roof with a truss structure. Besides, we placed the bearing walls along the bending outer wall. As a result, the bearing walls will perform for various angles of shaking in earthquake, this means that it isn't depending on the X and Y axes, exposure to the interior is kept to a minimum. Furthermore, asymmetrical of the wooden beams is intended so that the ceiling doesn't segment the space too much. 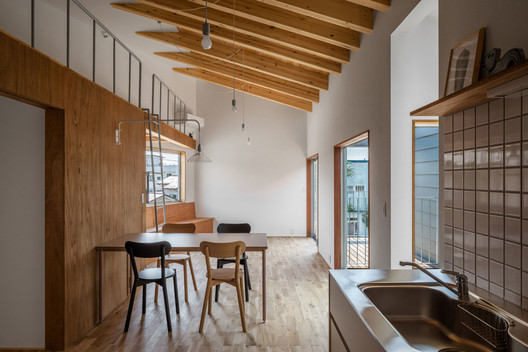 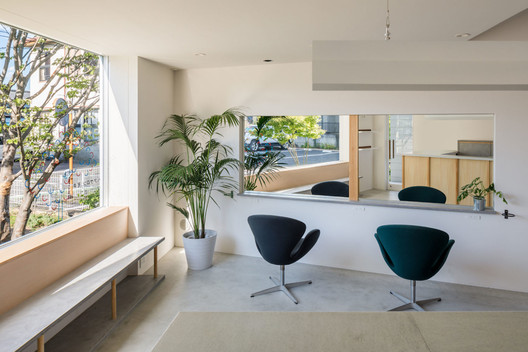